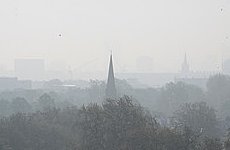 BORIS JOHNSON has been slammed by environmental groups after a new study showed London has some of the filthiest air in Europe.

The report – known as the European SootFreeCities Ranking – said London’s government had taken “backward steps” in combating air pollution, particularly pollution caused by vehicles, citing the shrinking of the Congestion Charge zone and the huge hikes in transport fares.

Out of 17 major European cities in the rankings table, London was placed fourth bottom and handed a humiliating F grade. Its score of 58%, compiled from a list of criteria including emissions and public transport use, compared badly to top rated cities like Berlin and Copenhagen, which scored 84% and 82% respectively.

“The mayor seems to have crippled the potential of existing measures to improve London’s air quality,” said Simon Birkett, of the Campaign for Clean Air in London.

Others point to next year’s Olympics, when millions of visitors will have to suck in London’s soot, though no-one claims things are as bad as in Beijing, the site for the last Games.

“This independent Europe-wide study of action to tackle air pollution is an international embarrassment for London, the government and the mayor,” said James Grugeon of Environmental Protection UK.

“With less than a year until the Olympic Games, London is doing less to deal with its dangerous air pollution levels than other major European capital cities. The Healthy Air Campaign is calling on the mayor and government to take urgent action to do the same in London.”

Fireworks Night Twice Over as Diwali Lights Up Guy Fawkes