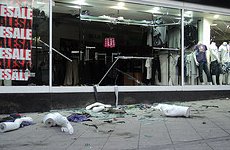 BORIS JOHNSON wants courts to have the power to send young looters and rioters to special schools, where they would be “isolated from their peers”.

“Depriving the offender of their customary school place is something which would hit home,” the London Mayor said in a letter to Justice Secretary Ken Clarke.

“It would isolate them from their peer group, preventing bragging rights on school premises, and send a salutary warning to other pupils that such behaviour will result in ejection from the school community.”

At the moment, courts are not able to make use of Pupil Referral Units, which are seen as a tough option of last resort. Instead, disruptive pupils are recommended for a stay at a PRU by schools.

Among the Mayor’s other proposals are for convicted looters to:

* Meet the victims of their crimes
* Clear up the mess they have made
* Have free travel passes confiscated.

“Those who have the benefit of free travel will have the right removed as a result of being involved,” said Johnson.

“They can earn it back if they do good in their communities, but that will be quite a burdensome and laborious process.”