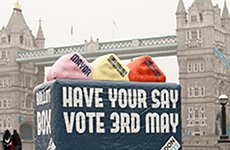 LONDON’S Mayoral election is now officially underway and a new poll suggests the 3 May vote will be a neck and neck affair between incumbent Boris Johnson and main challenger Ken Livingstone.

The survey for the BBC by Ipsos MORI doesn’t have a straight Who Do You Want For Mayor? question, instead taking a reading on how the candidates stack up on a series of issues important to Londoners.

Top of the list of concerns is the economy, cited by 59% of those polled, and here Tory Johnson and Labour’s Livingstone both score 27% for having the best plans.

Candidates from minor parties, Brian Paddick of the Liberal Democrats and Jenny Jones of the Greens, received only one per cent each on the economy question.

Today’s poll backs up the findings of previous surveys, which have the two main candidates within a couple of percentage points of each other and the rest trailing way behind.

“This will certainly be the closest election since the post was created in 2000,” said Tomasz Mludzinski of Ipsos MORI.

“When looking at who Londoners think has the best ideas on the issues it becomes clear how open the election is.”

Though campaigning has been going on since at least the start of the year, today is the first day candidates can put in their nomination papers, from now on publicity spending by the contenders is controlled and London Elects starts its drive to get people to vote, as in the photo.

Vasectomy Kit, Breast Implants and Ashes of the Dead: All in...

Mayfair Squatters Given Thumbs Up by Council’s Property Man