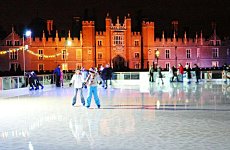 To break the ice for the Henry VIII 500 Years Celebrations at Hampton Court Palace anyone with the name Henry (or Henrietta) is invited to come along and enjoy a free skate at the Palace from Thursday 8th January to Sunday 11th January 2009.

Simply turn up with some form of photo id to prove your Henry status and get your skates on with Henry VIII. The ice rink is open between 10am and 10pm so come along and celebrate Henry VIII’s 500 year anniversary at Hampton Court Palace. No advance booking is required.

The ice rink at Hampton Court is one of London’s most dramatic Ice Rinks and is only open for a few more days as it closes on Sunday 11th January. If you haven’t already been, the ice rink is situated on the banks of the River Thames and is the quintessential festive skating experience. Set against the awesome backdrop of Henry VIII’s historic red brick Tudor Palace the rink is beautifully illuminated at night. Whether you gather a group of friends, plan a romantic date or decide to make a day of it at this world-famous Palace, the Hampton Court Palace Ice Rink is one of the coolest locations for festive fun with a group of friends or a New Year family gathering.

The 22nd of April 2009 marks the 500th anniversary of Henry VIII’s accession to the throne. Historic Royal Palaces will be dedicating the whole year to marking the lasting legacy of the mighty monarch with permanent representations, temporary exhibitions and thought-provoking debate. At Hampton Court Palace the theme for 2009 is Henry VIII: heads and hearts, and upriver, the Tower of London will be launching the major exhibition Henry VIII: dressed to kill. See website for more information www.hrp.org.uk.