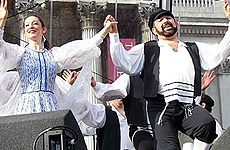 ONE big Jewish party takes place on Trafalgar Square this Sunday for the second annual Simcha on the Square, an event backed by London Mayor Ken Livingstone.

“This year’s event will be even bigger and better, providing an opportunity for Londoners to enjoy the many things London’s Jewish community has to offer,” said the mayor.

That’s some prediction as last year’s celebration attracted over 25,000 to the square. Livingstone has taken flak from Jewish organisations in the past due to him inviting Islamic militants for talks and because he compared a Jewish journalist to a Nazi concentration camp guard.

Music is the centrepiece of the event, with Jewish musicians and groups from around the world turning up, such as choirs, klezmer bands and wedding-tunesmiths. There is also an exhibition by the Jewish Museum and workshops for kids in things like how to make a spice pouch. Refreshments include kosher ice-cream.