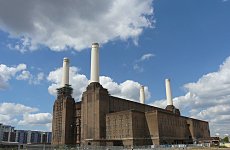 BATTERSEA Power Station mixes winter sports with music next month for a weekend festival under the banner Freesports on 4 Freeze, as it’s sponsored by Channel 4.

Over 200 international sportsmen and women will be taking part this year, along with 500 tonnes of genuine snow and a 32m jump.

Not only will the festival bring some top snow-based events to London – including the LG Snowboard FIS World Cup and the International Freestyle Big Air – but there’s a solid music line-up, too.

Cypress Hill have now been confirmed, along with Orbital and Friendly Fire, with more names to be announced over the next few weeks.

Tickets are now available for the frosty 30 October – 1 November event.

Orbital are also playing at the Brixton Academy and other UK venues.

Glass Half Empty for Pubs as Beer Sales Slump