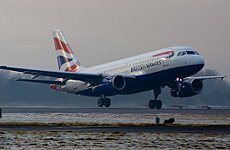 BRITISH AIRWAYS passengers are likely to be spared strikes over Christmas after it emerged the company and the Unite union were close to an agreement.

The warring parties have re-started talks that broke down during the last series of strikes over the summer and BA boss Willie Walsh has already sounded less aggressive than before.

Where Walsh once called Unite “dysfunctional” and “out of touch with the real world”, he now says he doesn’t “believe Unite want to pursue further industrial action and would like to bring this to an end”.

For its part, Unite has called off a vote, originally due this month, on strike action thanks to the talks and has emailed members that a new deal will be announced “by the middle of next week”.

The last of those three was brought in as a punishment against those thousands of Unite members who went on strike and it is thought this is the area over which a deal is now concentrated.

Watchmen to Emerge Out of the Thames