MENUMENU
Home London News Arsenal is the Most Expensive Place to Watch Football in the UK,... 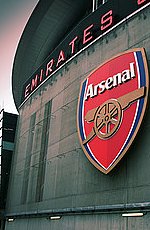 ARSENAL won a lucrative double today, with news that the north London club charges the most in the country for both match day and season tickets.

Commenting on the BBC’s Price of Football survey, Arsenal’s money men pointed out that the club charges far less for Capital One Cup games.

“Our Capital One Cup prices have been £10 for adults and £5 for children,” said CEO Ivan Gazidis.

“What we know, because of the tremendous take up, is that there are people who want to watch top class football, but for whom price is a factor.”

The cheapest ground to watch Premiership football is Fulham’s Craven Cottage, where a season ticket will set you back £399 and a match day ticket £20.

For the Championship, Crystal Palace emerged from the survey as the most expensive London club.

London to Get Electric Car Re-Charge Network by 2011