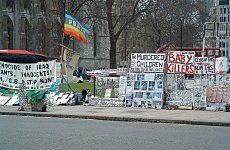 Haw’s display, with which he has lived for years, inspired artist Mark Wallinger to produce a replica, called State Britain, that needed a team of 15 assistants and some UKP90,000 to complete.

Accepting the Turner Prize, the artist was quick to pay tribute to Haw’s fortitude. “Brian Haw is a remarkable man who has waged a tireless campaign against the folly and hubris of our government’s foreign policy,” said Wallinger, originally from Chigwell, Essex and later a student at Chelsea School of Art and Goldsmith’s College.

“For six-and-a-half years he has remained steadfast in Parliament Square, the last dissenting voice in Britain. Bring home the troops, give us back our rights, trust the people.”

State Britain was recently on view at Tate Britain, but is now in storage in preparation for a European Tour next year.

Our picture is of Brian Haw’s original.