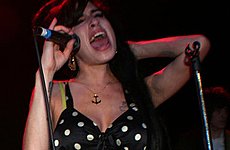 AMY WINEHOUSE, whose funeral it is today, is set to be honoured with a tribute concert.

No details of the musical memorial have been released as yet, but it is thought the star-studded event will take place in London later this year, featuring performers who admired Winehouse’s talent.

“There will be no shortage of people wanting to sing,” a source told The Mirror.

“[Amy] struck a chord with so many. Hopefully the balls can be set in motion over the next few months when it isn’t so raw.”

Going by the tributes that flooded in when news came through of Winehouse’s death, that “no shortage of people” line is no idle boast. Top performers from across the musical spectrum have queued up to lavish praise on the singer who died on Saturday.

George Michael called Winehouse, “the most soulful vocalist this country has ever seen”; Adele said the Back to Black singer “paved the way” for herself; Elbow’s Guy Garvey believes Winehouse “reclaimed the word ‘soul'” from cheese-merchants; Rolling Stone Ronnie Wood said he was “privileged to know her”; and Carole King spoke of the “gift” that Amy gave the world.

In contrast to the celebrity factor planned for the tribute concert, today’s funeral is to be small-scale.

“The funeral will take place on Tuesday and will be a family and close friends affair,” said a spokesperson for the Winehouse family.

Londoners Gear Up for Santa as Christmas Getaway Gets Underway