MENUMENU
Home London News All Aboard for the London Boat Show 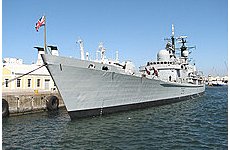 HMS EXETER, a Type 42 Destroyer which served in the first Gulf War, is one of the intriguing highlights at this year’s London Boat Show, which opens at the Excel exhibition centre on Saturday.

The Exeter, the last remaining ship left in the Royal Navy fleet that saw action in the Falklands War of 1982, gives some military oomph and history to what is otherwise mostly a display of extravagant luxury and futuristic design.

Hundreds of boats will vie for attention, with humble dingies up against fabulously appointed top of the range cruisers suitable for the likes of Roman Abramovitch.

Other noteworthy treats include Ellen McArthur’s Extreme 40, classic boats including an exhibit about the on-going restoration of the Cutty Sark and a series of Deck Games that prove popular with children.