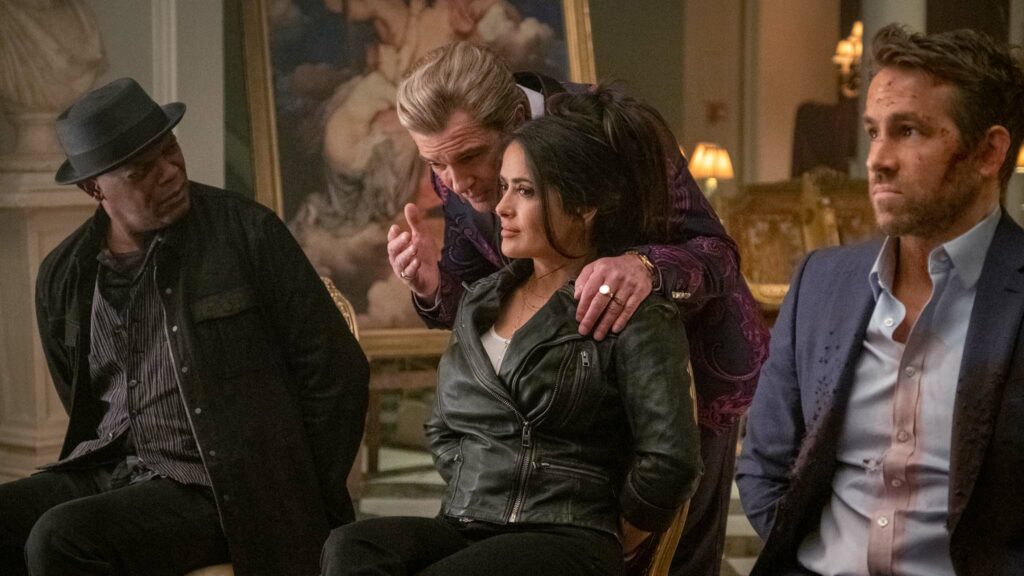 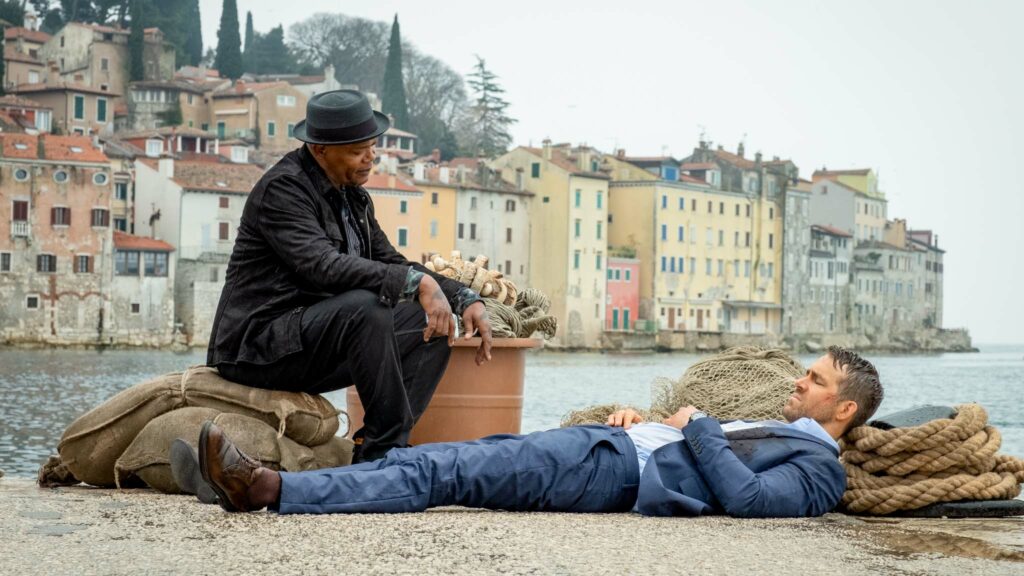 Review: The unwieldy title of director Patrick Hughes’s high-stakes action comedy, a direct follow-up to his 2017 picture The Hitman’s Bodyguard, exemplifies the inelegant, slapdash spirit of a globe-trotting caper which gleefully reunites Ryan Reynolds, Samuel L Jackson and Salma Hayek. Returning writer Tom O’Connor, who penned the sequel’s script with siblings Brandon and Phillip Murphy, evidently believes if it ain’t broke, don’t fix it – a sensible approach if the original film wasn’t beset with miss-and-hit irreverence, loopy plotting and tonal inconsistencies. Those flaws are evident in The Hitman’s Wife’s Bodyguard, which contrives a cursory James Bond-esque plot to disable Europe’s financial markets as a flimsy framework for slow-motion shootouts, bloodthirsty fist fights and an explosive car chase over a collapsing elevated highway.

A heavy reliance on profanity for laughs becomes wearisome – “Your mouth needs an exorcism,” Reynolds informs Hayek during her opening salvo of filth – although some base pleasures are undeniable, such as Hayek’s luridly gynaecological explanation for her character’s inability to fall pregnant. The introduction of Antonio Banderas as a flamboyant arch-nemesis falls depressingly flat. He’s a toothless villain in comfortable footwear without the merest whiff of psychosis or danger. Many of the ramshackle plot’s supporting characters are redundant, including a Scottish Interpol agent, who is an easy target for lazy national stereotyping when she is casually likened to William Wallace and Sean Connery by a gruff American counterpart.

Bodyguard Michael Bryce (Reynolds) is in the throes of an existential crisis now he has been stripped of his triple-A rating. “I’m a bodyguard without a licence. That’s like a belly dancer without a torso!” he laments to his beleaguered therapist (Rebecca Front). She convinces Michael to take a sabbatical from the protection business so he can concentrate on self-improvement during a recuperative break in sun-kissed Capri. International con artist Sonia Kincaid (Hayek) gate-crashes the Mediterranean paradise and compels Michael to help her rescue hitman husband Darius (Jackson) from the clutches of the eastern European mafia.

The Hitman’s Wife’s Bodyguard relies on Reynolds’ natural charisma and exuberance to paper over sizeable cracks but there’s only so much one man can do. Frantic pacing extends to action sequences including a triptych of simultaneous brawls, which surrender clarity to rapid-fire editing. Director Hughes’s licence to thrill is revoked.

Find The Hitman's Wife's Bodyguard in the cinemas 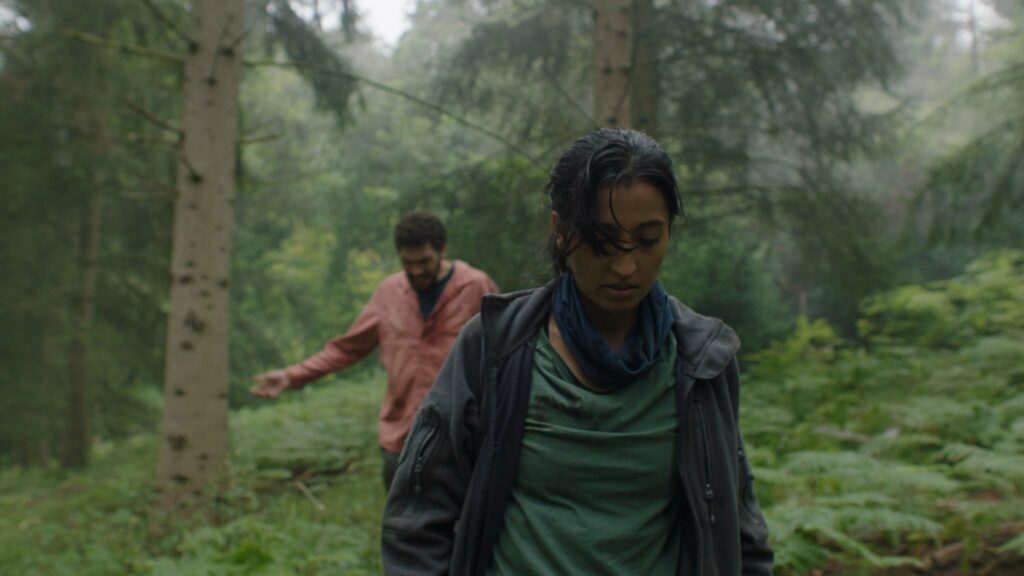 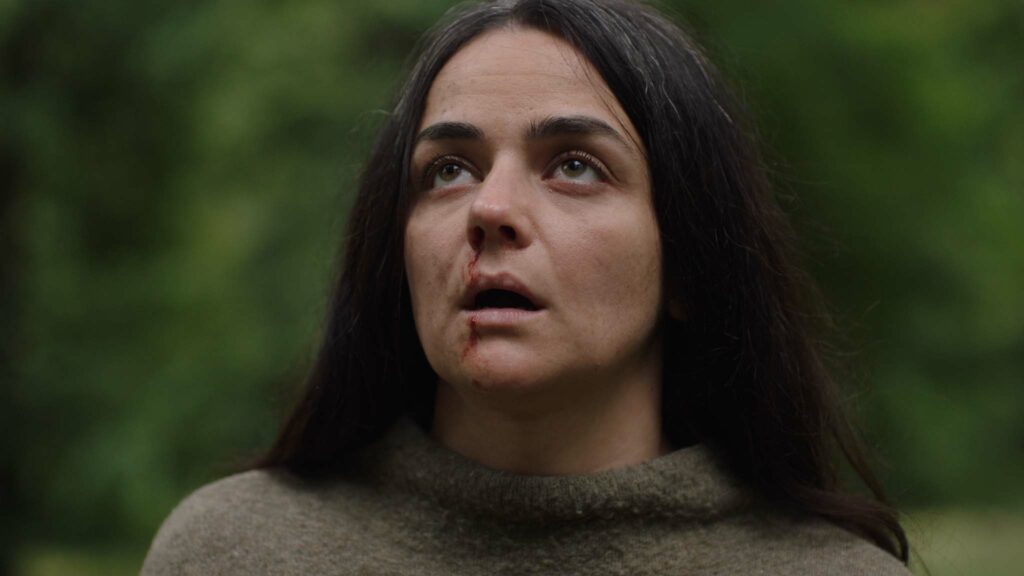 Review: Beware the kindness of strangers. Written in response to the Covid pandemic and filmed during last summer’s lockdown when the milk of human kindness nourished communities during months of isolation, In The Earth is a trip in the most disorienting, hallucinogenic sense. Essex-born director Ben Wheatley’s return to his psychological horror roots before he dives into The Meg 2 with Jason Statham conjures a woozy, kaleidoscopic nightmare in a rugged, rain-soaked environment that thrums with unseen life and threat. “People get a bit funny in the woods, sometimes,” observes a medic (Mark Monero) near the beginning of the film, foreshadowing more than an hour of phantasmagorical lunacy and gnarly mysticism that unhinges the characters’ minds and ultimately Wheatley’s picture.

Repeated use of intense flashing images, which may affect viewers who are susceptible to photosensitive epilepsy, is an effective sensory overload to reflect underlying fears of emerging from lockdown and being overwhelmed by visual and aural stimuli after an extended period of solitude. Wheatley seldom flinches – a blackly comic set piece involving an infected foot and an axe achieves a perfect, stomach-churning blend of nervous giggles and full-blown gore. Clint Mansell’s score and an unsettling ambient soundtrack vie for supremacy as the script’s tug of war between science and superstition becomes increasingly brutal and bamboozling.

In the aftermath of a deadly virus, scientist Martin Lowery (Joel Fry) treks into the wilderness to assist with a groundbreaking study of flora run by his old flame, Dr Olivia Wendle (Hayley Squires). She is operating in woodland steeped in myth and magic, where local schoolchildren draw pictures of a malevolent forest spirit called Parnag Fegg. Park ranger Alma (Ellora Torchia) patiently leads Martin on the gruelling two-day hike to Dr Wendle’s camp, which tests his diminished stamina after months of inactivity.

During the expedition, Alma senses they are being watched and her nagging suspicions are confirmed when they are attacked at night in their tents by an unseen assailant, who steals their shoes and Martin’s scientific instruments. A shaggy-haired hermit called Zach (Reece Shearsmith) comes to the injured party’s aid and gradually discloses a fascination with nature’s primordial rhythms that lie just beyond a thick fog of mushroom spores.

In The Earth refuses to be neatly pigeonholed as a survival thriller, slasher horror or an ill-advised jaunt into folkloric terror with faint murmurs of The Evil Dead and Midsommar. Wheatley’s film treads its own haphazard path, sometimes to its own detriment, especially in a messy final reckoning. Fry and Torchia’s measured performances contrast with the cold, clammy creepiness of Shearsmith and Squires, the former walking a tightrope between mania and menace. Explosions of graphic violence leave nothing to the imagination courtesy of nauseating make-up effects and prosthetics. Beware the kindness of friends, and strangers.

Find In The Earth in the cinemas

In The Heights (PG) 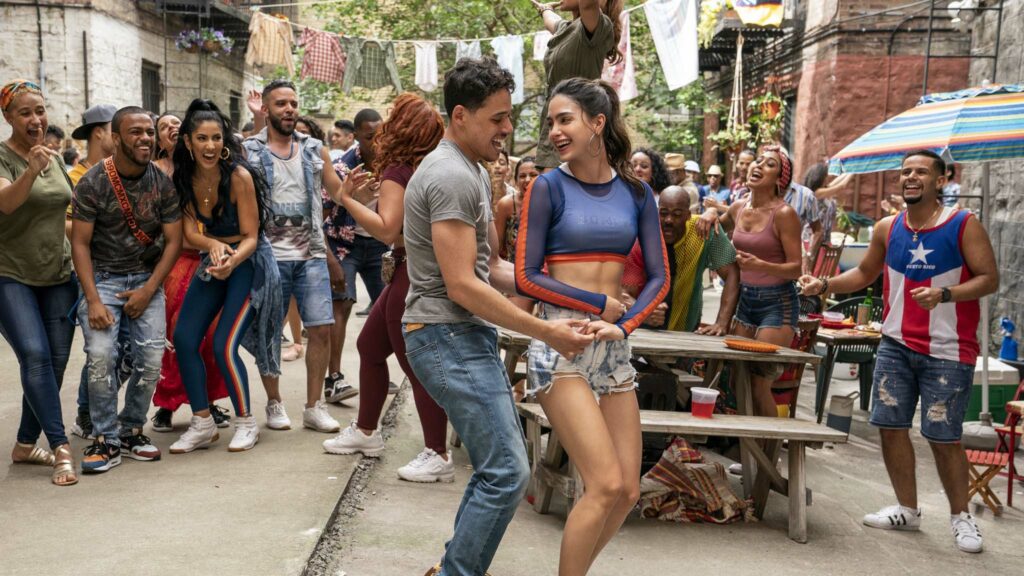 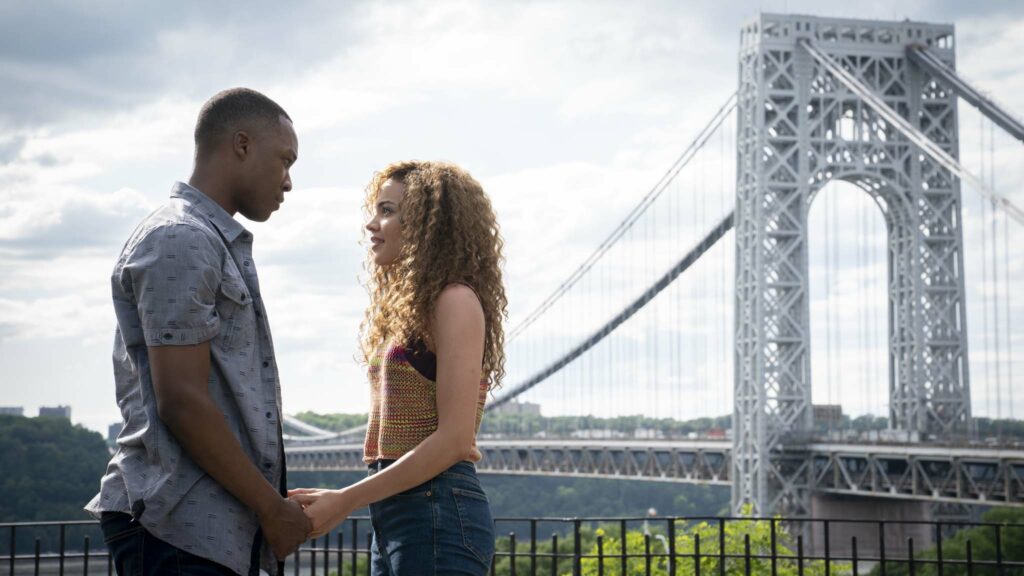 Review: Young hearts run free a short distance from the 181st Street subway stop in New York City in an energetic film adaptation of the 2005 stage musical with a book by Quiara Alegria Hudes and music and lyrics by Hamilton creator Lin-Manuel Miranda. Shot primarily on location in the culturally rich Manhattan borough of Washington Heights where “you can’t walk two blocks without bumping into someone’s big plan”, In The Heights is a life-affirming celebration of Latin American people and their cultures. At a time when diversity is a buzzword on Hollywood’s glossy lips, director Jon M Chu’s frequently exhilarating picture juxtaposes experiences from Cuba, Dominican Republic, Mexico and Puerto Rico against the spectacular backdrop of the George Washington Bridge.

Hudes’ script remains largely faithful to her stage version, reflected in a running time close to two and a half hours, and she deftly navigates themes of isolation, gentrification, racial and income inequality without losing any of the pizzazz of the show-stopping song and dance sequences. Chu’s formative years behind the camera of the Step Up films invigorate breathlessly choreographed set pieces including the splash-perfect synchronisation of hundreds of extras in an outdoor public swimming pool for the song “96,000” and a dreamy gravity-defying duet on the side of a building worthy of Fred Astaire to accompany When The Sun Goes Down.

Bodega owner Usnavi (Anthony Ramos) is saving every cent to realise his father’s “small dream” of a beachside bar back in the Dominican Republic. He imagines that better life with his younger cousin Sonny (Gregory Diaz IV) and the woman who raised him, Abuela Claudia (Olga Merediz). However, Usnavi’s ambitious plan risks separation from good friends Benny (Corey Hawkins) and Nina (Leslie Grace), and the object of his affections, aspiring fashion designer Vanessa (Melissa Barrera).

As the temperature soars heralding a blackout, Usnavi decides where his heart belongs. Meanwhile, Stanford University student Nina clashes with her father Kevin (Jimmy Smits), telling her old man, “You can’t keep putting your life’s work on my shoulders”. Also, hair salon owner Daniela (Daphne Rubin-Vega) and her girls Carla (Stephanie Beatriz) and Cuca (Dascha Polanco) reluctantly relocate to the Bronx in response to soaring rent prices in the neighbourhood.

In The Heights encourages spirits to soar with a heady combination of Chu’s rumbustious direction, Miranda’s smartly syncopated lyrics and committed performances anchored by Ramos’s luminous star-making turn. Merediz, a standout Tony-nominated performer from the 2008 Broadway production, repeats the same feat in glorious close-up and shatters fragile hearts with her wistful solo Paciencia Y Fe. The big screen can barely contain the exuberance of the carnaval del barrio at full blast. In those moments of symphonic rapture and exultation, Chu and his cast really do hit the heights.

Find In The Heights in the cinemas 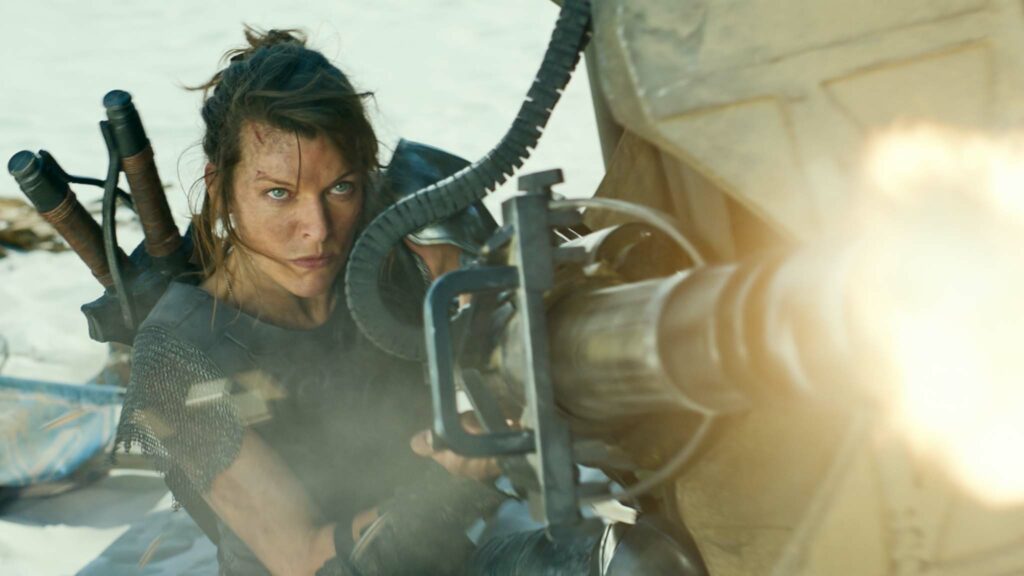 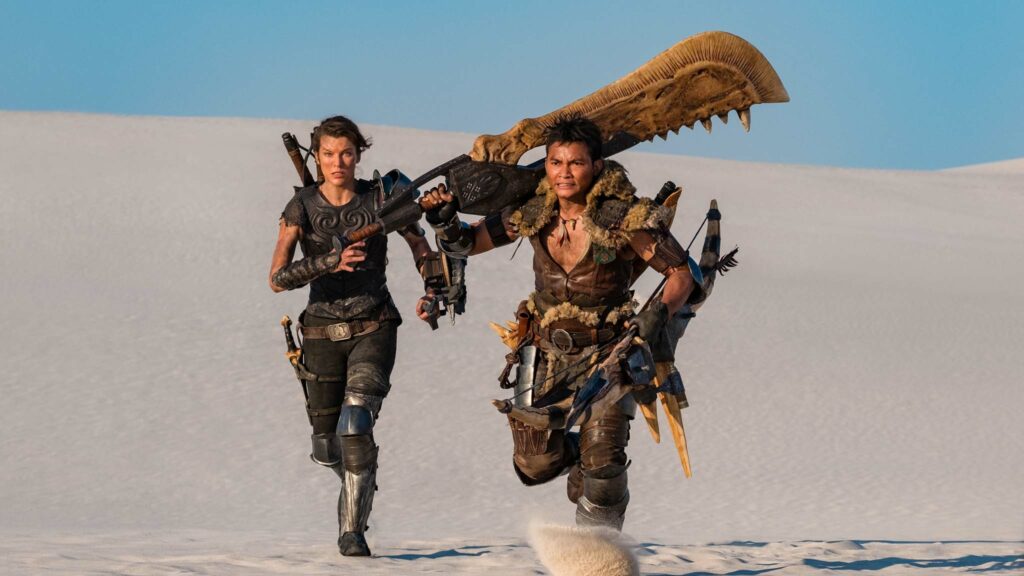 Review: When filmmaker couples excitedly say “I do” at the altar, they should also make a vow to say “We don’t” to mediocre genre projects that are simply an excuse to work together. Director Ben Falcone and actress wife Melissa McCarthy are trapped in a vicious cycle of misfiring romps that squander her bountiful gifts as a physical comedian. Now director Paul WS Anderson and actress wife Milla Jovovich are seemingly determined to corner the market on bombastic action adventures inspired by video games.

After six chapters of the bloodthirsty Resident Evil franchise, the couple trade flesh-hungry zombies for more ferocious beasts in an otherworldly escapade based on a Capcom video game series. The language barrier between the two leads, Jovovich and Thai martial arts star Tony Jaa, is played for uncomfortable laughs in Anderson’s script, which takes a disconcertingly laidback approach to coherent storytelling as the action oscillates between parallel realms. Impressive digital effects bring hulking creatures to life and Anderson orchestrates one exhilarating set-piece: a fire-breathing dragon called a Rathalos taking down a military plane in mid-air.

However, dialogue and characterisation are gossamer thin with a focus on exhausting showdowns between the US Army and gargantuan predators impervious to a blitzkrieg of bullets, grenades and missiles. Anderson continues to take delight in watching his wife being pummelled and maimed on screen, including bruising hand-to-hand combat with Jaa that serves no dramatic purpose other than to showcase the actors’ acrobatic excellence.

US Army Ranger Natalie Artemis (Jovovich) leads her squad including Axe (Jin Au-Yeung), Dash (Meagan Good), Lincoln (Tip “T.I.” Harris), Marshall (Diego Boneta) and Steeler (Josh Helman) on a mission to locate missing troops in the desert. Bravo Team’s tyre tracks mysteriously vanish in a stretch of sand lined with stone pillars. An electrically charged storm engulfs Natalie and her platoon and they are propelled through a portal into the New World where a horned subterranean predator called Diablos sits atop the food chain.

The soldiers’ impressive arsenal is no match for Diablos’ scaly armour and the terrified military unit seeks shelter in a cave where spider-like Nerscyllas are waiting to pounce. Meanwhile, a skilled hunter (Jaa) of these hideous beasts surveys the carnage from a safe distance using his collapsible telescope.

Monster Hunter hacks and slashes at a wearying pace accompanied by the steady growl of composer Paul Haslinger’s score. Jovovich and Jaa catalyse inert screen chemistry and whenever Anderson runs out of expendable human cast, he casually introduces nameless fresh faces to sacrifice to the towering denizens of the New World. Considering that Rathalos, Diablos and other creatures can apparently cross over into our world, the stakes should be perilously high. Instead, Anderson treats his lumbering creature feature as a walk in the post-Jurassic park.

Find Monster Hunter in the cinemas