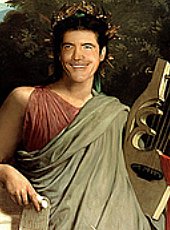 Gordon Brown and David Cameron needn’t worry too much yet as the survey was for celebs only, but Lumley’s success in the campaign to let Gurkha’s live in Britain might give them cause to fear the future.

Cowell’s X Factor charm earned him 21% in the poll for MSN, one pip ahead of Lumley, with thin-moustached news reader Trevor McDonald in third place on 17%.

Lumley says she has no intention of making a bid for the top job on the grounds of politicians’ workload.

“I have had a look close up at what MPs do, the responsibility on their shoulders and how hard all of them, no matter which party they are in, no matter what position they’ve got… they work absolutely ceaselessly,” she said.

On the other hand, that’s such a perfect politicians answer, you have to wonder.

Pamela Anderson’s wild habits alleged to be driving her to early...