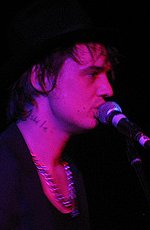 PETE DOHERTY was arrested for the second time inside a week, in the early hours of this morning.

The Babyshambles singer was stopped in his car near Gloucester by police on suspicion of being over the alcohol limit and then taken to a nearby police station.

He is also being held for possession of illegal drugs.

“A 30-year-old man was arrested on suspicion of drink driving, possession of drugs and failure to stop for police, he remains in custody at this time,” was the way a spokesperson for Gloucestershire police told the story.

Doherty was arrested the other day, allegedly for taking drugs on board a London-Geneva flight. He was later issued with a fine and released.