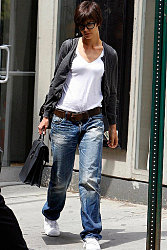 Peaches asked to interview Katie for Nylon magazine after seeing her Broadway play All My Sons, and the teenager was happy to take acting advice from her subject.

According to the Daily Star, The Peach might have an excuse to use that advice soon enough. She’s been pegged as an upcoming guest star for the hit US show Ugly Betty.

“[The writers] were looking for someone to play a vacuous Trust Fund brat when they stumbled across Peaches on Nylon TV,” a source said. “She was sending herself up a treat. It was clear that she is aware of how the public might perceive her and how she really is.”

Bob Geldof’s girl is working to make a name for herself in New York, and the source believes she’s on her way. “Peaches is already building up a reputation as a hard worker and she’s keen to make it here,” the source said.

But not everyone is so fond of the youngster. Could Katie offer some writing advice? Peaches’ inaugural Nylon column, all about life in New York with husband Max Drummey, left magazine staff deleting hundreds of biting online comments in the first three days after publication.

Lines like “America is a strange place, a place of contradictions, but a place that never fails to change one’s world view” didn’t go over well with readers.

British columnist AA Gill apparently wrote in response: “The banality is shocking. Get some life experience, keep your head down and until you do, save us from this insipid, vacuous social commentary that justifies the dislike of you.”

What would Katie say?

Jay-Z and Beyonce to duet