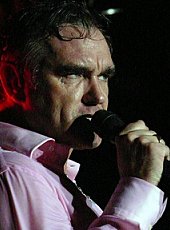 MORRISSEY has re-arranged the Royal Albert Hall gig he cancelled due to a throat illness.

Originally scheduled for 13 May, the former Smith’s lead singer will now be turning up at the same venue on 27 October, coincidentally the birthday of someone pretty cool in the LondonNet office.

Tickets bought for the May date will be honoured for the new October one.

In similar fashion, fans who missed out for the same throat-related reasons on 11 May at the Birmingham Symphony Hall get to see their man on 23 October.

Mozza is also in town for a three-night stint at the Brixton Academy at the end of this month, from 28-30 May.

Note: Regrettably Morrissey’s show at London’s O2 Brixton Academy on Thursday 28th May has been cancelled. Morrissey is on continued doctor’s orders not to sing, to ensure a complete recuperation.

Event Organizers would like to apologize to fans for the disappointment. Additional information will be issued as soon as possible, and we have been told to advise ticket holders to hang on to their tickets.