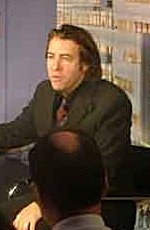 JONATHAN ROSS has vowed to shock the audience at this year’s Baftas with an “unlikely” word.

That pledge might worry the prestigious event’s organisers, who chose the mouthy presenter despite his recent run-in with the comedy police in the Andrew Sachs affair.

But the chances are Ross’s word will be odd rather than offensive.

He asked fans of his Twitter site to suggest an “unlikely” word to use when doling out Baftas and says he “will whittle them down to a top three then slip one in.”

The Baftas – the main British film awards – take place on 8 February, a fortnight after Ross makes his TV presenting comeback on his chat show.

Prince Harry liked to ‘be amongst’ the ‘taste of blood’ in...