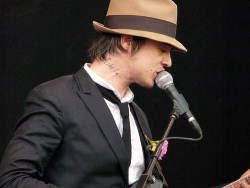 Pete Doherty & The Rumble Strips will join the All-Star line-up of David Gest…My Life! A Musical Concert Extravaganza when they perform with The Temptations Review Featuring Dennis Edwards at the HMV Apollo Hammersmith on Wednesday 14 October 2009 at 7:00 PM. Edwards is the Original Grammy Award-Winning Lead Singer of The Temptations Classic Hits: Papa Was A Rollin’ Stone, I Can’t Get Next To You, Ball Of Confusion and Psychedelic Shack as well as his classic solo single Don’t Look Any Further. Doherty, The Rumble Strips and Dennis Edwards with The Temptations Review have lined up a remake of a soul classic for their first outing.

David Gest…My Life! A Musical Concert Extravaganza tells the story of this extraordinary producer (the highest-rated musical in the United States and seven other countries Michael Jackson: 30th Anniversary Celebration), television star and unique individual through his love of music. This is the only London date in the upcoming 24 city UK tour of David Gest…My Life! A Musical Concert Extravaganza, which comes hot on the heels of sold-out shows and strong reviews in London and Liverpool in January 2009. Performing live on stage are thirteen celebrated acts encompassing over thirty top 5 records, all performed by the original artists.

In homage to Gest’s best friend from childhood, Michael Jackson, the entire ensemble will join together to sing his 1983 hit song Human Nature. As part of the tribute, a never-before-seen interview between Gest and Jackson will also be shown, which will give a rare insight into what Gest describes as the real King Of Pop.

David Gest says: “I was truly amazed at the public reaction and support from the first two shows last January in Liverpool and London. The places were packed and it was just an exhilarating experience. The tribute to my good friend Michael Jackson will be a heartfelt salute to a person who had a great presence in my life. I’m thrilled to be joined by an All-Star line-up of performers in celebrating his remarkable life and musical achievements. These are the artists who inspired Michael Jackson musically as he had a great love of traditional soul music. Adding some of today’s contemporary musicians is just the icing on the cake.”

Performing live on the night are The Temptations Review Featuring Dennis Edwards: the Original Grammy Award-Winning Lead Singer Of Their Classic Hits (Papa Was A Rollin’ Stone, I Can’t Get Next To You, Ball of Confusion and Psychedelic Shack) with Guest Performers Pete Doherty & The Rumble Strips joining them on a very special number; Russell Thompkins, Jr. & The New Stylistics, the Original Lead Singer Of All Their Hits (I Can’t Give You Anything (But My Love), Rock N’ Roll Baby, You Make Me Feel Brand New, You Are Everything and Sing Baby Sing); Peabo Bryson (Tonight, I Celebrate My Love, Whole New World (Alladin’s Theme) and Beauty & The Beast); Jimmy Ruffin (What Becomes Of The Brokenhearted and Hold On To My Love); Candi Staton (You Got The Love and Young Hearts Run Free); Billy Paul (Me and Mrs. Jones, Let ‘Em In and Your Song); Deniece Williams (Free, Let’s Hear It For The Boy and That’s What Friends Are For); Freda Payne (Band Of Gold, Bring The Boys Home and Deeper And Deeper); Dorothy Moore (Misty Blue, I Believe You and Funny How Time Slips Away); William Bell (Private Number, Tryin’ To Love Two and Born Under A Bad Sign); Jean Knight (Mr. Big Stuff and My Toot Toot); Kim Weston (It Takes Two, Take Me In Your Arms (Rock Me) and Helpless) and Very Special Guest Star, the renowned Percy Sledge (When A Man Loves A Woman and Warm And Tender Love) and Many More Surprise Guests. This will be a star-studded evening in true David Gest fashion!

Also featured in the show are many of the characters Gest made famous during his stint on ‘I’m A Celebrity…Get Me Out Of Here!’ including the Chinese Girls With Herpes, Little People Of DavidLand, the Von Snatch Family Singers and the Gospellettoes. Also performing with Gest will be his cousin from Preston, Minge Lecocka (pronounced Le-cock-cah). Do not miss this rare chance to enjoy more than thirty top ten hits, many of them reaching number one and the dry and witty humour of David Gest.

David Gest is best known in the UK for his much-celebrated appearance on I’m A Celebrity… Get Me Out Of Here! in 2006 and his other prime-time TV series including Grease is the Word (ITV1) and the highly-rated This is David Gest! (ITV1) as well as his popular 2007 autobiography Simply The Gest!. Gest has produced over 100 specials internationally.