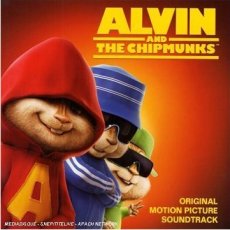 The Kids Christmas movie of 2007, those adorable Chipmunks, Simon, Alvin and Theodore are back! Also staring Jason Lee (My Name Is Earl) as Dave Seville, David Cross and Jayne Lynch. Using the latest in computer-generated imagery, Alvin and his friends have been transformed in to Pop Stars on the big screen.

Global phenomenon’s, and an all-time children’s favourite, Alvin and The Chipmunks, have been entertaining generations of fans the world over since 1958. The guys are showing no signs of letting up, as they bring you Alvin and The Chipmunks – The Original Motion Picture Soundtrack, due for release on January 7th.

Alvin and The Chipmunks are looking forward to keeping your children entertained throughout Christmas and well in to the New Year with THE catchiest album to be released this winter. Become a Chipmunk yourself, and sing along to all your high pitched favourites from the movie, Bad Day by Daniel Powter, the amazing Funkytown by Lipps Inc., Witch Doctor and of course, The Chipmunk Song!

The View From The Shard – Review