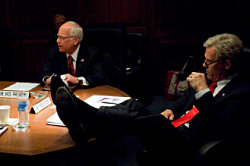 After years of toil in supporting roles actor Josh Brolin broke through to a new level with high profile performances in American Gangster and No Country For Old Men. Now he plays lead in W., starring as American president George W. Bush for director Oliver Stone.

It’s been a rather impressive few years for you, hasn’t it?
Right, but once you confine it to the year of where do you go from there?

But it’s enabled you to take the step up to play the lead in W., doesn’t it?
That was what I hoped, to respect the moment. I had a lot of opportunities and a lot of money came my way, so thank God for my friend Brett Markinson, who taught me most of what I know about trading stocks. That gave me an objectivity to it all. His whole thing is ‘the minute you start to feel greed, sell, and the minute you start to feel fear look and see if it’s something you want to acquire because it’s probably a pretty good time to buy in’. I think it helps to have the ability to step back and go ‘am I going to feel comfortable looking back on this or am I going to feel like I took the first buck because I was so happy to be making a buck as opposed to six cents?’.”

You ran the script for W. by your oldest son, which suggests you trust his judgement a great deal.

Very much so. It doesn’t end with him, I would never put that kind of pressure on him but I’ve shown him a few scripts that I was thinking about doing and I think he has a good point of view. It’s an off beat point of view, but I like his insight into characters and story.

Your father, James Brolin, is a successful actor. Was that easy to come to terms with when you started out?
I decided to get into that business early on after I took an acting class in school which I liked very much. Then once I decided to do it I did a bunch of things that I’m sure my kids would never do. I made up a resume, I lied, there were a lot of obstacles for me. People didn’t want there to be any nepotism, so they sometimes wouldn’t see me based on that fact.

Do you think W. offers a more sympathetic portrait of George Bush the man than people will expect?
For sure. Sympathetic is a tough word to use because of what that administration has done, it’s hard to use the word ‘sympathetic’. Am I more sympathetic towards the man? I don’t know, I just feel like I have more information now. There were moments where, the best thing for me just as a citizen, was to be able to study the Republican point of view. To be able to study the evangelical point of view, and then ultimately to study the Bush administration, and Bush himself. And read as many books as I could on it.

How did you feel about him before embarking on this movie?
I judged this guy as cosmetically as a lot of other people, that he’s just a stammering, stuttering idiot. You can’t be the president and just be an idiot, so I think that was very irresponsible of me, and lazy of me, to write him off as that. I’ve learned that that’s not the case at all.

Large chunks of the American population trust him precisely because he’s not the smoothest of talkers, don’t they?
I don’t think that’s accurate now but I think that was the case. I think that’s how he got voted into office, twice. I think people really hooked into this fallibility, after the elitism of Reagan and all these other presidents. To bring somebody down to ‘our level’ making us feel that it was more possible if a guy like that could become president maybe ‘we’ could.

For some people the sexual indiscretions of Bill Clinton are tougher to forgive than anything Bush has done though, aren’t they?
Which is phenomenal. He made a mistake and he lied and I think there’s been proper consequence for that, but to want to impeach somebody because of that and then to not impeach somebody under impeachable acts, not going forth with it is phenomenal. It’s stunning to me, some of the reactions of the American people. And it’s also stunning to me that by speaking up, which I think is very important, there are these blogs that say ‘why does this guy speak up, why does Susan Sarandon say anything, why does Sean Penn say anything?’. Why would you try and stifle that? It’s good isn’t it? We’re the ones that vote so we’re the ones who should speak up regardless of what job you have, whether you’re an actor, a plumber or a reporter.

Oliver Stone was, briefly, in the same class as George Bush at Yale. It’s curious that these men have followed such different paths?
Very different paths. When I was thinking about doing this role Oliver and I met at his house. I met his Mom who’s a staunch Republican, from France, very funny. I was surprised by that. Then I met his wife who is, I’m not going to say staunch, but a true Christian. I thought ‘wow, man, he hasn’t surrounded himself with a bunch of yes people who think exactly like he does,’. He’s constantly challenging himself with the perspectives and perception of things of other people who are close to him. I was very turned on by that, it was very different from a lot of stories that you hear about political bias.

That flies in the face of Oliver’s reputation, doesn’t it?
Whatever reputation Oliver has. Like Bush, Bush is very different from the reputation of this stammering, stuttering idiot. Once you get into it you go ‘I see his intention,’ and some of the intention was very pure, it’s just curtailed by what it gets corrupted by a lot of times which is greed and fear and wanting to be re-elected. And oil.

But just because you have a conviction that something’s right doesn’t mean it’s right does it?
No, and obviously to me the best leader – and this is just my opinion – is somebody who can reassess a situation. They may have a conviction and they may have foresight that the rest of us don’t have, but the ability to reassess and create a different pathway is, to me, the sign of a great leader.

Is it satisfying to be able to explore issues like this through the medium of film?
It keeps it all sustainable for me because it’s something new every five or six months. This opens up so much information, so much psychologically and behaviourally that it’s overwhelming at times.

So do you think audiences will be surprised by Oliver Stone’s nuanced and balanced portrait of George W. Bush?
I think so, personally. We’re not out to slam anybody, we’re out to tell this very compelling story of a guy who was really flailing for many, many years, who decided to get sober on his own and then to deepen his whole relationship with Jesus, and became the president of the United States. Twice. That’s an amazing story.