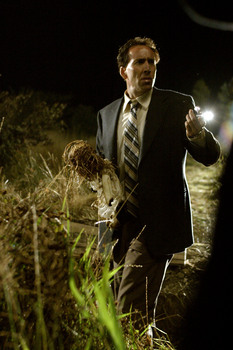 Nicolas Cage knows all about remakes. Following crime thriller Kiss of Death and heist movie Gone in Sixty Seconds, he has even dared to touch the untouchable, turning Wim Wenders’ Wings of Desire into 1998’s City of Angels. So it’s no surprise that he should take on 1973 British cult classic The Wicker Man. With this new version adapted and directed by Neil LaBute (Nurse Betty, Possession), Cage plays a sheriff named Edward Malus, who is sent to a remote island to investigate the disappearance of a young girl. Discovering an enclosed community (led by Ellen Burstyn) where the interference of strangers is not welcomed, Malus’ journey is not for the feint-hearted.

For the 42 year-old Cage, who won an Oscar for his searing portrayal of an alcoholic in Leaving Las Vegas, approaching dark material is nothing new. He may be best known for his action heroes, in films like The Rock and Con Air, but it’s in films like Lord of War (where he played an arms dealer) and Bringing out the Dead (a paranoid ambulance driver) where he made his mark. Nominated for an Oscar for playing a neurotic, masturbation-obsessed screenwriter and his brother in Adaptation, Cage is evidently unafraid by any role — which may be why he accepted the lead in his other new film this autumn, Oliver Stone’s hymn to 9/11, World Trade Center. Like The Wicker Man, it stands the chance of being criticised — but it seems that Cage wouldn’t have it any other way.

How did this new version of The Wicker Man start?

The whole thing generated because my friend, Johnny Ramone, who was a fan of horror films, had shown it to me. He had a list of movies he wanted me to see that I wasn’t aware of. I mean, I knew about The Wicker Man because I recalled images of the poster as a boy, but for some reason the movie never got a proper release in the States. And then he mentioned the title, and I said, ‘That sounds interesting.’ I came over to his house and we watched it together and the movie left me with the most profound feeling, unlike any other film, really, in the way it ended — which I don’t really want to give away. It made me think a lot about it. I was disturbed for about two weeks.

How did you get to know Johnny Ramone?

We both had an interest in posters. I met him though that way. He liked monster posters and I did as well. He came over to my house one day at a party and we got talking. He had a big collection. He had all that stuff. I didn’t. I had one or two. So we got talking about that and then I found out how passionate he was about movies, and then we became friends on that basis.

What made you think the original film was ripe for remaking?

I thought a lot about the movie, and whether there would be any way to recreate another contemporary version of the story that might reintroduce the title to people, people who don’t even really know about the original. Most people here in the States don’t even know anything about The Wicker Man. So I thought it was an interesting way to bring something that was excellent back to people’s attention. And the new version is a different track altogether. There’s no way you really want to do something completely the same — you can’t. There’s no point in that.

How did director Neil LaBute get involved?

He came into the office and talked about it, and came up with a great idea. He made it a matriarchal society and he found different ways of introducing the themes of the original into a more contemporary concept, and how it could happen today. I like Neil’s directing a lot. I like Nurse Betty. I thought Greg Kinnear was excellent in that. I like In The Company of Men. He’s got an extraordinary touch for showing people who are suffering.

So you suffer in the film then?

Oh, yeah! There’s no question. I’m on the receiving end! But I have to say that the MPAA cut a lot out. That was a problem. I was forced to deliver a PG-13 in order to get the movie made, and the stuff that I came up with that was really wonderful Edgar Allen Poe and grotesque, the MPAA cut. You will be able to see that on the Director’s Cut DVD.

Can you explain more about the Poe influence on the film?

I wanted to bring in a Edgar Allen Poe feeling to the film. I remember when I first met with Neil on the set, I brought The Raven with me, and a book of Poe stories. I wanted to create that feeling of Gothic horror, if there was any way we could do that. The movie is not gratuitously violent. You’re not going to have pop-ups or cheap shots. It’s more about ambience and the eerie quality of the place and the people.

Is The Wicker Man, in your mind, very different from Neil’s other films?

It is quite a bit different. It’s dealing with a society of women who have been persecuted — most recently with the Salem Witch trials. So they have found sanctuary in an island that they have to themselves, and their Celtic ancestors are still informing them, in terms of their beliefs. Now I don’t believe that people…nobody that I know would say that people today are doing these kinds of things. There’s a whole culture out there that has Pagan ideals but they don’t kill animals and things like that. Those things have progressed with the times — but maybe there are sacrificial aspects in existence. Who knows?

How aware were you of the cult fan worship of the original movie?

That I didn’t know. I’m sure that whenever you tackle something like this — and I wasn’t aware of that — I’m going to be under attack. But that’s OK! Whatever inspires people. This is a very different movie. I’m not going to say we’ve made a better film or the same film. We haven’t. We’ve just made a different film. Ellen Burstyn is excellent. She reprises the Christopher Lee role, and Christopher Lee was amazing in the original. In a way, I would say this was a tip of the hat, an homage, a thank-you for inspiring us, we liked it so much, let’s see what else we can do with the concept.

You’ve touched on horror before — initially, with 1989’s Vampire’s Kiss…

It’s been a while but you’re right, I do have an interest in horror. I like the genre. I think there’s a lot of places you can go with it. Although I was talking with Oliver Stone just yesterday, and I asked him why he won’t make a horror film and he said, ‘You can’t top the Japanese, so why do it?’ And I said, ‘What kind of thinking is that? It would be your own thing.’

You have just worked with Stone, of course, on 9/11 drama World Trade Center. Are you concerned about the reaction to that will be?

I can’t worry about what the reaction would be. I know the spirit with which we made the movie, and I know that I wanted it to be a film that would be healing and would provide encouragement in some way. Look around — the world is going through a lot right now. I think people are looking to movies to provide some sort of higher ground to help a positive outlet.

Playing the port authority cop John McLoughlin, who is trapped in the rubble, would you say it was the most emotional role of your career?

I would say so. There was no question that it was a daunting idea to go into World Trade Center by Oliver Stone. I was trying not to dwell on the pressure of that and just try to stay on task and do my job.

Do you have any regrets about not playing Superman for Tim Burton, now the new Bryan Singer movie has been released?

No, I mean I would like to work with Tim. I feel like we need to work together at some point. I know it would be a good match. But I have no regrets. I’m a big believer that the right person for the part is the one that winds up making the movie. I also feel that, in some ways, I’m recreating the experiences of someone you could say is a real Superman in World Trade Center. I was watching a biography on A&E and it was about the history of Superman, and the people that made him, and how it’s affected the people around the world. They said it’s the firemen and the policemen who risked their lives to save others that are the true Supermen.

So you see them as linked to the comics, in a way?

It’s ironic to me that you have the comic book version of Superman, then you have the flesh and blood, true-real version of Superman, who was an ordinary man who has risen to a level of the extraordinary by virtue of the fact that he was exposed to extraordinary circumstances of hardship — and he was able to overcome and survive. So the reason why these comic books are important to us, is that they help each and every one of us — almost in a Jungian way — get through the day. It’s like what Joe Campbell was saying about power of myth. And in John McLoughlin, I have a real version of that. And I think that’s why World Trade Center will be healing. We need these symbols and icons to give us hope.

You have just wrapped on Ghost Rider, in which you will get to play a Marvel Comics superhero Johnny Blaze. Is this a long-held ambition to play him?

Ghost Rider is good for me because there are a lot of people out there who know who Ghost Rider is but they’re real comic-book enthusiasts. They’re way into the comic book zeitgeist. I was able to try to create my own take on the character to make him interesting for the film audiences. It gives me a chance to introduce you to Ghost Rider, rather than, say, Batman introducing you to…Michael Keaton.

Has it been easy for you to go back and forth between big budget films and more independent fare?

It’s not easy to do that. I don’t want to worry about people’s expectations, but it’s inevitable that people do want a degree of certainty with what they’re going to get. I’m not providing certainty. I want to be full of surprises, and I want to surprise you and hopefully entertain you, and I want to keep you guessing. And maybe that will be the certainty. I want to always find new ways of reinventing myself. I just don’t ever want to get comfortable with anything I’m doing.