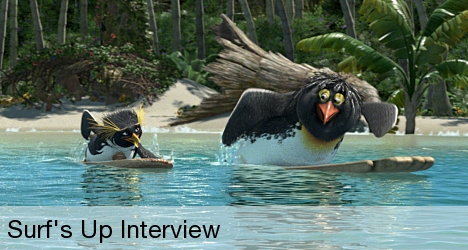 So, are you a surfer yourself?

I am a surfer, yeah. I’ve actually been surfing for about 40 years now. It’s something I got involved in when I was in high school – I love it!

What’s your stance on Penguins?

They really piss me off! No, I’m kidding, I don’t know any penguins personally, but I like them. It’s kind of amazing how there are so many movies starring penguins. I mean, you do sometimes think, ‘what is that all about?’ What makes it even more bizarre, is that we started making this film about 5 years ago and at that time there was not a movie penguin in sight. I don’t know, maybe someday soon all films will have to feature penguins.

How does working on an animated movie compare to a live action project?

It’s fun. Usually with animation, you are on your own in a booth with a script and you just read your lines. For this film, we were all in the room together, and there were cameras filming us the whole time capturing our movements. We were also encouraged to improvise a lot, and that made the whole process a lot more fun – it’s loose work.

Having seen the movie, was there a stand out scene for you?

Besides all the great surfing scenes, I kind of like the scene where I’m working with Cody (Shia LeBoeuf) on the board. Shia’s a great improviser. He loves to act and you can see he really enjoys the process – in fact, he’s just great!

Tell us about your character, Big Z

He was once a great surfing champion and, without giving too much of the plot away, he has now become a bit of a recluse. Shia’s character then helps him out of the slump and Big Z imparts his wisdom. It’s very much a father and son relationship.

The whole surfing scene is associated with the laid back, dude mentality, which is something you know very well from playing The Dude himself. Do you consider yourself DUde-like in real life?

Yeah, I do. The whole ‘dude thing’ kind of reminds me of what I was like when I was in High School. Let’s put it this way – half the clothes I wore playing the Dude in The Big Lebowski were my own. They were my jelly sandals and my baggy pants – so that tells you all you need to know!

What can audiences can expect from the film?

Well, I do think that it’s a movie for the kids, but I think that the grown ups will have a good time too. The film doesn’t talk down to kids and the comedy works on many different levels. I think it’ll also appeal to those who are interested in surfing, because they’ve made the waves look so beautiful. I mean they hired Kelly Slater to come in and be the technical advisor! For people who have never surfed, well…it really puts you in the moment.

So, what are you up to next?

I’ve just wrapped on a film I was working on with Simon Pegg, so at the moment it’s all about the acting. But I do feel another wave of music coming along, and I am gathering up the material for that. My daughter Jesse is a wonderful writer and singer, so I’m thinking of working with her – there’s definitely music in the air!