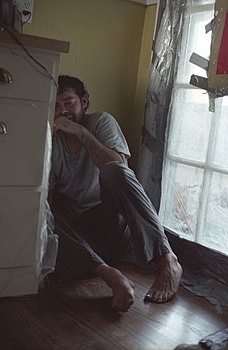 Since his breakthrough performance as stoner Ron Slater in Richard Linklater’s Dazed & Confused American actor Rory Cochrane has starred in a wide variety of films. These include Love & A .45, Empire Records, Dogtown, Flawless, Southlander and Hart’s War.

In the contemporary thriller Right At Your Door he plays Brad, husband to Lexi (Mary McCormack), LA resident and one of many shocked witnesses to the dirty bombs that have exploded downtown. But he quickly discovers that, as chaos ensues and the toxic ash rains down, the effects of these explosions are only just beginning to be felt.

Did the appeal of the film lie initially with the strength of the screenplay?

And while it’s about a direct attack on an American city you could read more into this story, couldn’t you?

Yeah, and I think that’s what’s good about the film. I don’t think it’s exploiting any one thing necessarily. Although terrorist acts are the backdrop to the film but I don’t think that’s the real focus to the film. The real focus is human beings left to deal with the aftermath of situations that unfortunately could occur in this day and age, but they could just as easily be natural disasters like hurricanes or earthquakes.

As an LA resident yourself is it shocking to see the city attacked, albeit in a drama?

I think it has an effect. I was living in New York when 9/11 happened, and I was also living in Los Angeles when they had that horrible earthquake when people were throwing themselves out of buildings because they were so terrified. It’s amazing how fast things can become chaotic when some horrible situation happens, whether it’s man made or natural. And I think it’s definitely topical. What I like about it is that it’s doesn’t get too specific. There’s a line in the movie where Lexi says ‘do you know who’s responsible for this?’ and I say ‘does it matter?’.

Has it caused controversy back home?

They just had a screening at the LA Film Festival and it was in Sundance. Not a lot of people have seen the film yet but of the ones who have I think the film definitely resonates with them. They leave disturbed and definitely thinking about things.

It looks like it must have been gruelling to shoot. Was it?

We shot six days a week, and thank God it was a short shoot, because it was emotionally and mentally draining to do this sort of material. It was very intense. And it stayed that way. If it was a four month shoot we would have had to check ourselves into an institution by the end of it.

Did that intensity help you bond all the more quickly with your screen wife, played by Mary McCormack?

Well you know it’s funny, Mary’s such a funny lady, talented and jovial but the material is obviously the opposite of that. We sort of just went to work and focussed on doing our jobs and we had a good time after it was done. It was definitely a labour of love. I just flew in on British Airways, first class, and that’s probably five times the amount of money that I got paid to do the picture.

You lived in the UK for a few years of your childhood, didn’t you?

I was born in New York, then I moved to Cambridge in England when I was about three months old. I lived there until I was almost eight. I appreciated it because zero to five are sort of your formative years, I was glad to spend them at Cambridge, which is a nice place.

Was it odd going back, with a funny accent and all that?

Is this in any way relevant to your subsequent decision to become an actor, this need you must have had then to fit in with your peers?

Mmmm, no, I didn’t really know exactly the point where I wanted to be an actor. But I know at this point, because I never went to college, I don’t really have anything to fall back on.

Dazed and Confused was your breakthrough film, is it tough to escape the image of the sort of character you played in that and tackle a greater variety of roles?

There definitely was for a time after that movie came out, which by the way was one of my best filmmaking experiences. We were all young and happy to be there, but there was definitely a period of time where they were trying to typecast me in that sort of role. You have to work your way through that.

As well as all your film work you had a recurring role in CSI: Miami, which must have been good to increase your profile even further.

I think everything helps. CSI: Miami is shown in 162 countries that’s good exposure. It’s very popular around the world. It’s funny what people know you from, you never can tell, but that one definitely had more of a mass appeal. I’ve had a lot of police officers over the years say they like the show, but that it takes them six months to get a DNA sample and we get it in minutes.

Ultimately you seem to enjoy the contrast of going from film to film, don’t you?

Yeah, I like to do different things and collaborate with different people. But I have no regrets for doing that show, it was very educational and it gave me a nice opportunity to go into peoples’ houses every week.

Your director on Right At Your Door, Chris Gorak, has a lot of experience as a production designer but this is his directorial debut. How did you find it working with him?

Chris was really great. For a guy who was making his directorial debut to have that kind of patience and attitude was incredible. He wasn’t pushy, he had a quiet knowledge about him which was nice to see from a director who, I guess you could say, was green. There were no insecurities showing. He’s very efficient in what he does, in his writing and his directing, with the budget. He’s a very bright guy.

How did the people who lived near to where you were shooting take to a movie production being, as it were, right at their door?

Well they weren’t too happy with it, we covered the streets with ash and trucks and crew and stuff, but it wasn’t that bad. We filmed in Echo Park which is not a place where there’s a tremendous amount of filming going on. But I think like New Yorkers, if there’s a film crew or set there they’re kind of bothered by the whole thing.

Were they at all curious about what you were filming?

Was that the greatest discomfort on the shoot?

I think the whole thing was pretty uncomfortable. And then for Mary and me, we’re acting with this literal barrier of plastic and doors and glass, it’s difficult to hear each other. She has to be out there breathing in this stuff, even though it was fake ash, it was still ash. I think by the end everybody was coughing. But I think the most uncomfortable thing was the level of intensity and emotional commitment that we had to bring to the project.

Is this the sort of acting challenge that gets you out of bed in the morning?

When you do it for that long you don’t want to get out of bed in the morning!

What were your thoughts when you sat down and watched the finished film for the first time?

That Chris had done a great job. I was just as disturbed as anybody else who has gone to see it. They screened it for me and Mary and my girlfriend and her husband and afterward the producers were outside the screening room anxious to know what we thought. They asked us, and I said I needed ten minutes and a margarita.