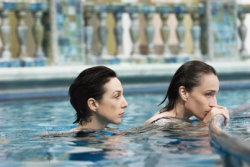 Philippe Claudel, who wrote and directed I’ve Loved You So Long, is best known as a novelist. Did you know his work?
I read his novel, Les Ames Grises – Grey Souls – and I loved it. Then I heard he wanted to make a film. The first thing he said to me was, ‘I have to warn you, you wouldn’t be able to be beautiful in this film.’ So I thought, oh good – because then he isn’t worried about actresses and vanity.

The costumes were really well thought out – all those horrible shapeless ‘I don’t love myself’ clothes. I enjoyed all that getting rid of all pretence of beauty. I loved just being able to be raw. The cigarettes were quite a chore, though. We had these repulsive things that came in a red packet.

Your character Juliette is someone who doesn’t give much away. You give a layers-of-the-onion performance, revealing her secrets gradually.
The appeal was exactly that – the suspense. Reading the script, I was thinking, when will it be revealed, when will she be able to get it out, burst the boil? We could really play with feelings and silence. I like the character because of her I have no idea what it’s like to be incarcerated for 15 years, so I had to do a bit of research. I was really frightened of going into a prison and talking to prisoners. I thought I’d be personally affected by their situation – whether it be loneliness, or whatever. I was terrified of having to come face to face with that situation, so I avoided that.

As a parent yourself, was it particularly difficult to deal with Juliette’s own tragedy as a parent? How much do you identify with a part – or you have have to detach yourself, when you’re dealing with a story as disturbing as this?
You do identify with characters, depending on how much you’re allowed to play with it. In this case I grabbed Juliette, and she was mine and no one was allowed to come near her. And the film is very disturbing. Basically I was acting with, and using my own feelings with my children. It was really tough, actually.

How does Philippe Claudel work with actors?
He sort of left me alone. I kept barking at him actually. That was probably why. (Laughs) It was his first film, and he’d never directed anybody. So to begin with, he would explain things, and I’d say, ‘Yes but I know that, we need to go a step further.’ Then in a while we grew more confident with each other, he’d let me tweak the lines a little, and put them a bit backwards or whatever.

This is very much a French film. Do you think a film like this could have been made on this side of the Channel?
Not with me in it. I wouldn’t have been asked to do it. In Britain I hold champagne glasses and run around in country houses! That’s one of the great things about doing things in another language, it opens up all sorts of possibilities for a different type of performance and a different type of role.

Confessions Of A Shopaholic, Sophie Kinsella