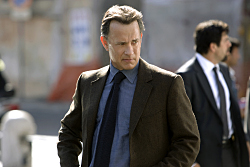 The team behind the global phenomenon The Da Vinci Code returns for the highly anticipated Angels & Demons, based upon the bestselling novel by Dan Brown. Tom Hanks reprises his role as Harvard religious expert Robert Langdon, who once again finds that forces with ancient roots are willing to stop at nothing, even murder, to advance their goals.

When Langdon discovers evidence of the resurgence of an ancient secret brotherhood known as the Illuminati – the most powerful underground organization in history – he also faces a deadly threat to the existence of the secret organization’s most despised enemy: the Catholic Church.

Tom Hanks is one of Americas most beloved and successful film stars. He has won back-to-back Oscars for Best Actor in 1993/94 and is the third most successful actor in terms of box office totals.

The trailer is quite action packed; are there a lot of action sequences in the movie?

Yeah, there is, but there are no fist fights. It’s not like Langdon grabs a machine gun. He does actually shoot a gun, but only to break a window. That’s it. There’s a clock that’s running in this movie, not only the bomb of antimatter that might explode, but there’s also the papal election that is ongoing. Robert Langdon has to stop this trail of Illuminati-murders before that election happens, because if he doesn’t that means that the papal election has been hijacked. If that’s possible that means the purity of the status quo, which might be a good or bad thing, is going to be forever upset. There is a great line where Langdon walks into the Vatican as an adversary, here on both sides, and says: “You guys don’t pull your holy sea stuff and I don’t pull my Priory of Sion stuff.” It’s like a gentleman’s agreement. But he also says: “Look, I don’t study symbols, because I don’t think they are important. They are: How they have a mark in our lives and our society. I just hope that I can help.” It is very straight forward, and he is able to get on with it.

In the book your character is quite romantic with Vittoria (Ayelet Zurer), is that also the case in the film?

Actually, if there’s any romance, it is hidden deeply behind their desire to go stop a cardinal from being killed. There’s not a lot of time to pause for romance before the pope is elected. Because Dan Brown created Langdon with “Angels & Demons”, he had more time to spin out who he was. By the time he got to “The Da Vinci Code” he was all business all the time. Now, because this is the second movie, the second story of Langdon, we didn’t have time to explore the romantic notions that might exist between a very healthy and robust Robert Langdon and then a very healthy and attractive Vittoria Vetra. I like to assume that at the end of the movie they retire to perhaps a cup of espresso or maybe a glass of wine at the Hassler Hill Hotel at the top of the Spanish Steps or maybe a smaller place somewhere in the outside of Rome, but you just don’t see it.

Ron Howard has talked about using a more artistic licence and being less reverential in this film. Do you think this is also true with your interpretation of the Robert Langdon character?

Well, because this is the second one we do have that opportunity. Langdon has this truth in his pocket that he did not have in the book. In the book this was the first time this all happened, so irreverence to a degree, I would almost say it’s like a competitive spirit that he has. He’s almost confrontational with them, and it actually fits very well. There’s a lot of extrapolation that goes on in this book, because quite frankly Dan Brown wrote it before you guys even existed. There was no Google when Dan Brown wrote it. He wrote of the election of the pope as this thing that had three TV trucks out in front of the Vatican and nobody cared. But we all know that when the pope dies and a new one is coming up, it’s a media circus. Every network sends their top anchor over to Rome to sit in a thing above St. Peter’s Square to cover it. So he was just quite frankly inaccurate, because when he wrote it no one had been named Pope for such a long time that it was quite forgotten what a big story it was going to be. We don’t take a lot of liberties with it, but in order to adapt it to current common sense a lot of things just simply had to change.

CERN the world’s largest particle physics laboratory also provides a key location for the story. Is your mental image of it different to reality?

Well, It’s just the most amazing thing I’ve ever seen. It’s not unlike when you go to NASA in Cape Canaveral and Cape Kennedy and you just see a bunch of what looks like bad office buildings and weeds, but when you walk inside you see the orbiter, the space craft, which is actually hooked up to the boosters and it’s all ready to go. That ends up being a very formidable human structure. When we saw the ATLAS accelerator – the sheer size of it was daunting. I don’t know how complicated the particle accelerator needed to be, but it is certainly a lot more complicated than one might think. And then you add to it, that you are three stories high or one hundred or forty metres underground – you can’t help, but look back and say we’re powerful human beings. We are amazing entities if we can imagine this in the first place, and then build it. I’d like to come back and help them press the button and bring it back online just to see, what’s going to happen.

The story of Angles and Demons provides some great insights to CERN and its scientific theories. Do you think there is a concern of security for the institute and their work?

The reality is that there’s not any big security around CERN in general anyway because there’s nothing to steal, not even a secret, they can take away. If somebody was going to come into CERN and try to walk away with what CERN has developed here, they would still need 450 Billion dollars to go back and build a light speed particle collider. That being said, if in the course of all of this we get to talk about what goes on here at CERN and realize that something great can come out of that – I think the power of movies is substantial. Don’t discount how cool a movie can make something mundane look.

Is there a chance that we can watch a movie directed by Tom Hanks with starring Ron Howard in the future?

I don’t think Ron wants to be an actor. And I’m not sure I want to be a director. It’s hard work. As a director I still think I’m a student. I don’t know instinctually how to walk into the process of directing a movie, because you have to communicate so much more. You have to be able to be a cheerleader and also a taskmaster. I don’t have to do that as an actor. But if I was to direct Ron Howard, I guarantee you, I would put him through a living hell every day. I would demand so much of him. We wouldn’t quit until he leaves the set crying. Weeping!