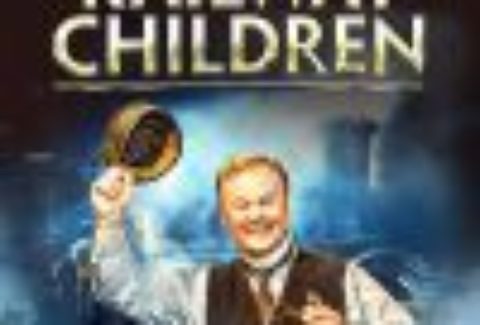 BAFTA award–winning presenter, actor and voice-over artist, Justin Fletcher will transform from the much-loved children’s character Mr Tumble into the equally loved Mr Perks for two months only, from 31 August to 30 October 2016. The Olivier Award-winning production of Mike Kenny’s stage adaptation of E. Nesbit’s novel The Railway Children – Live on Stage must end on 8 January 2017, following more than two glorious years at King’s Cross Theatre, where it opened to critical and public acclaim on 14 January 2015, following previews from 16 December 2014.
Justin Fletcher has presented on various children’s channels and programmes, including Fun Song Factory on GMTV, Tikkabilla (BBC), CBeebies, and Justin’s House (BBC). As Mr Tumble, he presents the BAFTA and Royal Television Society award-winning Something Special (BBC), a children's television programme designed to introduce children to Makaton signing, and specifically aimed at children with delayed learning and communication difficulties. Justin has voiced the characters of Shaun and Timmy for Shaun the Sheep. He was appointed Member of the Order of the British Empire (MBE) in the 2008 Birthday Honours for services to "children's broadcasting and the voluntary sector".
Martin Barass will continue as Mr Perks until 28 August. Also in the cast of The Railway Children are Suzy Cooper as Mother, Sophie Ablett as Bobbie, Matt Jessup as Peter, Beth Lilly as Phyllis, Lindsay Allen as Mrs Perks, Peter Gardiner as Doctor/Butler, Connie Hyde as Mrs Viney, Shaun McCourt as Jim, Blair Plant as Father/Schepansky, Moray Treadwell as the Old Gentleman and Adam Collier, Helen Brampton, Alan Drake and Julie Gilby. The children’s ensemble is made up of four teams of ten children aged between 8 and 16.
A purpose built 1,000-seat theatre, complete with a railway track and platforms, and with a state of the art air conditioning and heating system, was specially created for this production on King’s Boulevard, behind King’s Cross Station, a site which has been loaned to the production for the duration of the run by Google. The York Theatre Royal production, which is in association with the National Railway Museum, features a live steam locomotive and a vintage carriage, originally built in 1896.
Directed by Damian Cruden, the Artistic Director of York Theatre Royal, with design by Joanna Scotcher, lighting by Richard G. Jones, music by Christopher Madin and sound by Craig Vear, Mike Kenny’s adaptation of The Railway Children was first produced by York Theatre Royal at the National Railway Museum, York, where it enjoyed two sell-out and critically acclaimed seasons in 2008 and 2009. The production then opened at Waterloo Station in the former Eurostar terminal in July 2010, where it again played two critically acclaimed sell-out seasons and won the 2011 Olivier Award for Best Entertainment, before opening in Toronto in 2011 in a temporary theatre built at the base of CN Tower in Roundhouse Park.
The Railway Children tells the story of Bobbie, Peter and Phyllis, three children whose lives change dramatically when their father is mysteriously taken away. They move from London to a cottage in rural Yorkshire with their mother, where they befriend the local railway porter, Perks, and embark on a magical journey of discovery, friendship and adventure. But the mystery remains – where is Father, and is he ever coming back?
2016 marks the 110th anniversary of the publication of Edith Nesbit’s much loved classic children’s book The Railway Children, which has subsequently been adapted for the stage and screen, most famously in the 1970 film version directed by Lionel Jeffries and starring Jenny Agutter, Bernard Cribbins, Dinah Sheridan and Sally Thomsett.
The production is presented in London by Tristan Baker & Charlie Parsons for Runaway Entertainment, Oliver Royds for BOS Productions and Sue Scott Davison, in association with York Theatre Royal and the National Railway Museum.