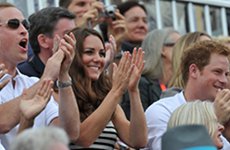 PRINCE WILLIAM and Duchess Kate are to live above the shop from next year when they open an office in Kensington Palace, where they will also set up home, and they’ll have Prince Harry on tap to referee any marital bust-ups.

The royal couple join an estimated 5.4 million British households – roughly a fifth – in which people work from home.

Will, Kate and Harry will have their very own offices in the palace upon Harry’s return from Afghanistan in January.

Pippa Middleton could also spend plenty of time at Kensington Palace, as she did last year when shepherding her sister through early marriage.

A royal aide told the Daily Mail: “The new set-up will be known as the Household Office of The Duke and Duchess of Cambridge and Prince Harry.

“Charles has agreed to fund the private office and has even offered to foot the bill for Kate’s not inconsiderable working wardrobe.”

Over a dozen employees will move to the west London residence next month to begin preparations for next year.

The three young royals are each to have their own private secretary; vicar’s daughter Rebecca Deacon will assist Kate and former Ministry of Defence press secretary Miguel Head has been appointed for William. Harry’s personal aide has yet to be chosen.

Helen Asprey is to become private secretary and confidante to the three young royals and royal gatekeeper Jamie Lowther-Pinkerton will supervise all the aides.

Will and Kate are also planning to move to Kensington Palace’s Apartment 1A, where Princess Margaret previously lived.

Boris Johnson Latest to be Hit by Expenses Scandal