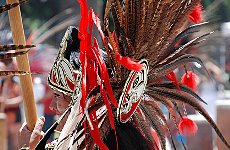 NATIVE AMERICAN warrior culture rides into town tomorrow, in the shape of Warriors of the Plains, a fascinating exhibition at the British Museum that runs until April.

When they’d got childhood out of the way, men belonging to the plains tribes were expected to join their elders in groups of warriors in which kudos was gained by stealing horses and women.

On top of that fun stuff, there were a series of rites and adornments, such as the famous headdress, to foster comradeship. Some of this strikingly evocative material is on display in this event.

Warriors of the Plains takes as its starting point the year 1800, so it’s partly a look at the way these established traditions coped when faced with the modern world and the exhibition goes on to show that even 200 years later, Plains Native Americans still retain a strong pride in the rituals of their past.

Warriors of the Plains: 200 Years of Native North American Honour and Ritual is on at the British Museum from tomorrow, 7 January until 5 April. Entry is free.

Southbank to Get New Park and Square in £1Billion Revamp