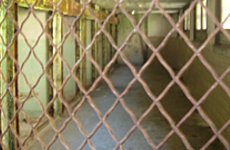 DEATH stalks Trafalgar Square from 12 August in the eerie form of a full-size replica of an American death row.

Billed as Death’s Waiting Room, the exhibit will appear outside St Martin-in-the-Fields Church, just across from the Square, to draw attention to the case of Linda Carty, a grandmother from Britain who faces execution in the Texas.

The death row on show is to be an exact copy of the one in which Carty currently languishes.

“I’m sure it will be an unforgettable experience.”

“There is no lonelier place than a death row cell, and no greater power imbalance than that between a condemned prisoner and the government that wants to kill them.”

Carty was convicted on kidnap and murder charges in 2002, but has always maintained her innocence. Reprieve say her original lawyer was incompetent.

Even the British government, not usually known for its critical attitude to the US, has said Carty’s legal representative was an “ineffective counsel”.

Nevertheless, a series of appeals have been turned down and unless the authorities grant Carty clemency – unlikely – she will be put to death “very soon”, say Reprieve.

Death’s Waiting Room opens at 1pm on Thursday 12 August when speakers, including Carty’s lawyer, will address the issues of the case. After that, it’s open until 5 September; 9am-9pm daily.

For more on Linda Carty, try Reprieve’s website, where you can find out how to support Linda and also how to help fund campaigns against the death penalty.

Our photo is meant to be suggestive: it’s not Carty’s, but the death row at the old Eastern State Penitentiary in Philadelphia.