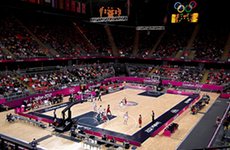 UNWANTED tickets to the London Olympics are to be re-sold in the middle of the night to try to fill up some of the empty seats seen at the 2012 Games.

Most of the no-shows at the Olympics have been from the ticket allocations of various national Olympic bodies and sporting associations. These groups are now to meet Locog and the International Olympic Committee every night to work out which tickets can be put back on the market.

Those tickets are then to go on sale via the internet from midnight of each new day to give other people a chance to take what would otherwise be empty seats.

“We will carry on doing that session by session, talking to the accredited groups and asking if we can release some of their tickets,” said Locog’s Jackie Brock-Doyle.

Culture Secretary Jeremy Hunt is also looking at the idea of brining in a 30-minute rule, under which any seats not used after half an hour of the start of an event would go back on sale.

“We’re looking at whether we’re able to do it,” said Hunt.

“But we are hosting this event under a contractual arrangement we have with the International Olympic Committee and Sports Federations, and so we do have to respect what we’ve agreed to contractually.”

Hotels – Ten Things We Hate About You