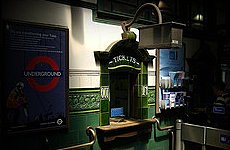 LONDON UNDERGROUND boss Mike Brown has sneered at staff trying to keep their jobs as being like something out of the “Railway Children”.

Brown aims to bring in remote control, driverless trains over the next decade, and leave the vast majority of stations without any staff, but faces fierce opposition from Tube unions, which say the plans compromise safety and would “ignore reality for austerity”.

“I just need to be able to ensure that people are doing the right roles fit for the future,” said Brown.

“Not [doing] some role in a ticket office that sits more comfortably with the Railway Children film.”

The Railway Children is a famous family film and book set in the age of the steam train.

Brown did offer some comfort to drivers on lines currently being upgraded, such as the District and Circle, the Hammersmith and City and the Metropolitan.

“I’m not going to take a sledgehammer and start knocking down driver’s cabs on existing trains,” Brown told the Financial Times.

Next up for upgrades are the Bakerloo and Piccadilly Lines, which could see driverless trains by 2020 if Brown’s plans come to fruition.

Meanwhile, Tube union Aslef is to ballot its LU members for strike action over a long-running dispute about pay rates for working on Boxing Day.