MENUMENU
Home London News The People: We Want Our Fishmongers Back 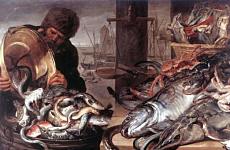 FISHMONGERS are the shops most people want to see come back to the high street according to a new survey.

31 per cent of those questioned plumped for fishmongers in the poll, for the British Shops and Stores Association, which put our slippery friends nine points ahead of more fashion shops.

Sea food has become more popular in recent years thanks to the publicity given to its heath benefits, but London has yet to see the return of the days, about 30-40 years ago, when you’d find a fish mongers in every shopping district.

There are signs this is starting to change, with upmarket purveyors of fine fish popping up in some areas, plus the emergence of farmers’ markets, which sometimes feature fish stalls.

One snag with the potential growth in the fish market is that for every expert on TV telling you to eat more fish, there’s someone else to point out many fish species are close to extinction.

Recently, for instance, TV chef Gordon Ramsay got himself in schtuck when he told viewers to lay off cod and take up skate instead. “There are plenty of them,” he said. The truth is that skate is on the Marine Conservation Society’s ‘Do Not Eat’ list as it is endangered.