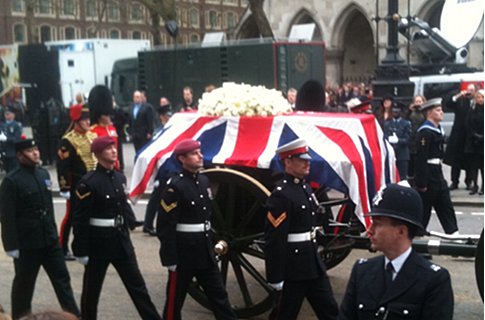 Margaret Thatcher was given a near royal send-off today as the former Prime Minister’s grand funeral cortege moved through the police-lined streets of central London.

In the main address of the ceremony, the Bishop of London admitted in front of the assembled VIPs that Thatcher herself “did not want a memorial service”.

Before that, thousands of people had turned up to watch the procession, which this morning moved west-east towards St Paul’s, where Thatcher’s family, political contemporaries and descendants gathered to hear ceremonial readings and hymns.

Our exclusive photo shows police watching crowds watching the coffin as its horse-drawn gun-carriage goes past.

Bishop of London Richard Chartres delivered the main speech in the cathedral and said he wanted to draw out Thatcher’s humanity, rather than look at her political record.

“There is a legitimate place for a debate about her legacy,” said Chartres.

“Parliament held one last week. But this is not the time and place for that. This, at Thatcher’s request, is a funeral service. She did not want a memorial service with eulogies.

“This is a place for human compassion.”

Despite the brave commitment to avoid politics and eulogies, Chartres then went on to defend Thatcher’s infamous “no such thing as society” comment and praised her for surmounting “immense hurdles” throughout her life.

Opponents of the estimated £10M price of the funeral have pointed to the similar cost in cuts suffered by some of Britain’s most vulnerable people.