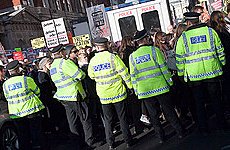 POLICE on duty at Thursday’s student demo are to be investigated after a protester came close to death when hit by a truncheon.

“We are aware of a 20-year-old male with a head injury who is currently in hospital,” said a spokesperson for the Metropolitan Police.

“The Independent Police Complaints Commission has been involved.”

The IPCC is the body that investigates accusations of police brutality.

The injured protester – Middlesex University student Alfie Meadows – was one of thousands held against their will for hours by police in Parliament Square in the latest ‘kettling’ operation imposed by the Met.

As Meadows was leaving the square, an as yet unnamed officer appears to have struck him on the head with enough force to cause internal bleeding beneath the skull. Meadows was later rushed to Chelsea and Westminster hospital, where an emergency three-hour operation saved his life.

“He was hit on the head by a police truncheon,” said Meadows’ mother, Susan.

“He said it was the hugest blow he ever felt in his life. The surface wound wasn’t very big, but three hours after the blow, he suffered bleeding to the brain. He survived the operation and he’s in the recovery room.”

“The wonderful news is that Alfie is talking and doing very well.

“Basically he had a stroke last night. He couldn’t speak or move his hand. But thanks to the wonderful medical care he’s come through it. It was terrifying.”

12,000 Muslims to Make Declaration Against Terrorism at Wembley Arena