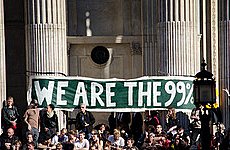 ST PAUL’S CATHEDRAL is ready to shut up shop in response to the rising numbers of anti-banker protesters outside its venerable doors.

Hundreds of Occupy London Stock Exchange campaigners set up camp near the landmark church on the weekend after they were blocked by police from marching to their Stock Exchange target on nearby Paternoster Square.

St Paul’s officials originally accepted the protesters with good grace, but the Holy Men are now praying for it all to end, partly because takings from tourists have gone down as the protester numbers have gone up.

“[Due to] the increased scale and nature of the protest camp, the cathedral must now review the extent to which it can remain open for the many thousands coming this week as worshippers, and visitors,” said Graeme Knowles, Dean of St Paul’s.

“Is it now time for the protest camp to leave? The consequences of a decision to close St Paul’s cannot be taken lightly.”

The protest by St Paul’s is part of a worldwide ‘Occupy’ movement in which demonstrators attempt to take over sites related to the global finance industry.

The movement features the now famous slogan ‘We Are the 99%’, which refers to the protesters belief that the super-rich, or top 1%, have stitched everyone else up in the aftermath of the credit crunch.

The Occupy message has struck a chord with millions of people, including, today, famous figures from the world of letters, including Salman Rushdie, Naomi Klein, Naomi Wolf, Noam Chomsky, and Donna Tartt.

“We, the undersigned writers and all who will join us, support Occupy Wall Street and the Occupy movement around the world,” reads a petition signed by the authors and many others.

London Gets Cheaper for the Super Rich