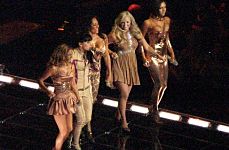 THE SPICE GIRLS cut their world tour short because Victoria Beckham and Geri Halliwell had a huge bust up.

The girl group – who have cancelled concerts in China, South Africa, Australia and Argentina – reportedly scrapped the dates after single Geri accused Victoria of being “insensitive” and boasting about her gorgeous supportive husband David Beckham.

A source told the Daily Star: “The other girls turned to their partners during the emotional and exhausting tour but Geri had nobody.

“She felt Victoria was really insensitive to her isolation. She makes sarcastic comments under her breath to wind Geri up, so it looks like Geri is being unreasonable. Victoria is also constantly going on about David and how lucky she is to have such a great partner, unlike Geri who is a single mum.”

On Wednesday (06.02.08), the band released a short apologetic video message to their fans citing “family and personal commitments” for the abrupt end of the tour.

Victoria said: “Our kids need to go back to school and we always said our families are our priorities. Sorry we haven’t got to see everybody.”

In the video, the group joke about in-fighting rumours and pretend to squabble, before Mel B screams: “We hate each other? Are you kidding? We love each other!”

The Spice Girls tour will now finish in Toronto, Canada, on February 26.

Admiralty Arch set to Become the Hotel Next Door to the...