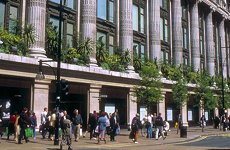 Selfridges has been voted the Best Department Store in the World for the second year running; the iconic British company beating US favourite, Macy’s, and South African chain, Woolworths to the prize.

The award was presented by the Intercontinental Group of Department Stores – an association of international shops representing 30 different countries – at the group’s biannual Global Department Store Summit this week.

Selfridges’ owner, Galen Weston, said: ”The Selfridges brand has gone from strength to strength worldwide, and this prestigious retail award recognises its true value as a performer and innovator.

”Receiving this distinction for a second term is very gratifying.”

The company’s managing director, Anne Pitcher, said: ”We are absolutely delighted that Selfridges has again been recognised as the best department store in the world.

”As the world’s eyes are on the UK for the summer Olympics and Queen’s Diamond Jubilee, Selfridges looks forward to delivering an extraordinary London experience for our customers from around the globe.”

Selfridges will keep the award until 2014. The flagship Oxford Street branch is currently celebrating the Jubilee by hosting a rooftop café serving afternoon tea, a crazy golf space and daily live performances from British artists.