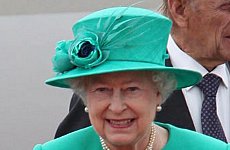 Britain’s Queen Elizabeth thinks her Olympic Games Opening Ceremony cameo was a “bit of a laugh”.

The 86-year-old royal took part in a pre-recorded segment with James Bond actor Daniel Craig before appearing to parachute into the Olympic Stadium in Stratford, east London, during Friday’s (27.07.12) spectacle, and while she didn’t watch her part, she admits the ceremony seemed to go “very well”.

During a tour of the Olympic Park yesterday (28.07.12), she told London Mayor Boris Johnson: “It all seemed to go very well last night. But I didn’t see my bit.”

Boris said: “You were brilliant Ma’am.”

And the monarch replied: “It was a bit of a laugh.”

The queen is said to have immediately accepted the invitation to film the cameo for the ceremony, and she shot the piece in just one take.

An official is quoted by the Sunday Mirror newspaper as saying: “It was not a case of having to persuade the queen to take part.

“Her Majesty said ‘yes’ to it straight away. She thought it was such brilliant fun. And when the idea for the format was explained to her she was happy with that, too. When we came to filming it the queen was a natural. Did it take long? No. Let’s just say we only had to film it once.”

The segment saw Bond arrive at Buckingham Palace in an iconic black London taxi and he then walked down the hallway flanked by the monarch’s corgis – played by her own pooches Monty, Willow and Holly – before being taken to the queen.

The pair then retired to a waiting Union Jack-decorated helicopter where they travelled from the palace to the Olympic Stadium and then appeared to parachute out much to the surprise of fans inside the stadium and the one billion people watching on TV sets worldwide.

But the joke was revealed when she arrived with her husband Prince Philip walking down the steps into their seats.

The queen’s cameo was the idea of the Opening Ceremony curator Danny Boyle, who admitted the monarch is a “good actor” and revealed she got on “very well” with Daniel during filming.

London Underground ‘Dicing with Death’ over 97% Cut in Safety Checks