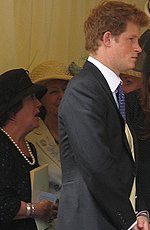 PRINCE HARRY is set to return to front line duty in Afghanistan, with the backing of Prime Minister David Cameron.

The 28-year-old undertakes the final stage of his Apache helicopter training next month in Arizona and California and is expected to head for Afghanistan sometime next year.

Last time he was there, in 2008, Harry’s role as a soldier on the ground was kept secret so as to protect both the prince and his comrades. When Harry was exposed by the media, he was immediately flown home.

But the Ministry of Defence and the Prime Minister are thought to see flying helicopters as less likely to attract special enemy attention.

“There is nothing to suggest David Cameron or anyone else would stand in the way of Prince Harry being granted his wish to go back to Afghanistan,” a source told the Telegraph.

But before that is the course in the US, where Harry will work at the Gila Bend Air Force Auxiliary base in Arizona and the US Navy’s airfield in El Centro, California.

“I’d just be taking up a spare place for somebody else if they didn’t have me going out on the job.”

Hugh Grant Announces the End of his Acting Career