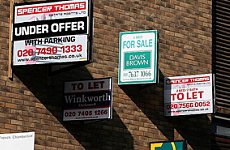 “The value of houses in prime areas of the capital fell by 4.1 per cent in November, a greater decline than the 3.2 per cent recorded for flats,” said Liam Bailey, of upmarket estate agents, Knight Frank, which came up with today’s numbers.

“Prices for prime central London property have now been falling for eight consecutive months. In previous months we noted that super-prime properties had remained immune from the downturn and that houses were performing better than flats.

“Neither of these trends has continued into the final quarter of the year.”

Knight Frank’s findings were backed up by Chesterton estate agents, who picked out Islington, Kensington and Chelsea and Wandsworth as the areas seeing the steepest house price slides, with some places slashing their prices by 25 per cent inside a year. In Britain as a whole, government figures suggest the annual house price fall is running at about 10 per cent.

But while London’s super-rich watch their assets dwindle, their counterparts abroad are apparently licking their collagen-lips.

“These dramatic falls may be painful to vendors, but prime London property is increasingly looking like very good value, particularly to foreign buyers who also benefit from the weak pound,” said Bailey.