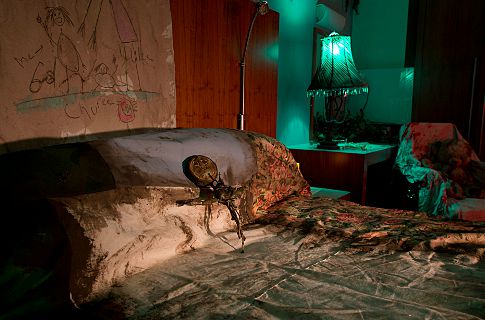 A temporary ‘pop-up’ horror hotel open its doors tonight (10 June 2013) in Camden, London with the sole aim of terrifying the living daylights out of its guests.

For once it won’t be the gauche decor and eerily cheery lift music that will be sending a chill down the spine of those daring to stay. Nor will it be the bill as there’s no charge to stay in the temporary scare room. We’re not even talking another outbreak of zombies.

Instead ‘lucky guests’ have won their stay in a specially prepared room at Camden’s Holiday Inn via a promotion for the DVD and Blu-ray release of paranormal thriller MAMA on June 17th.

“We’ve really ramped up the fear factor to create something that will have a lasting effect on those brave enough to try it out.” said Gary Oke, the practising psychotherapist who designed the one-off stunt.

“The experience has been designed to trigger a physical and emotional release known as the “fight or flight” response. When this response is activated, sequences of nerve cell firings occur, and chemicals like adrenaline, noradrenaline and cortisol are released into our bloodstream.”

“These patterns of nerve cell firings and chemical releases cause our body to undergo a series of very dramatic changes, such as an increase in heart rate”.

If all that doesn’t work, word has it a short stroll into the more nefarious nooks and crannies of close at hand Camden should enable even the most strong-stomached souls to stir a shudder. Tie Dye Shirts anyone?

Usain Bolt Could be Powered by Pie and Mash at the...