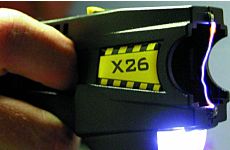 A MAN from north London who was wrongly Tasered by police has spoken out about his ordeal, labelling the attack by Met offiers “torture”.

“It was like being tortured,” 45-year-old Daniel Sylvester told The Guardian. “It went on and on and I felt they were going to kill me.”

Sylvester, a black man, like two thirds of those Tasered in London this year, was driving his Mercedes in Tottenham on 20 October when he was stopped by police working for the anti-gun crime outfit Operation Neon.

“Armed police jumped out and opened my car door and as soon as I stepped out of the car I felt something touch me on the back of the head and then I was on my knees,” Sylvester added. “Then it happened again and I was on my face and I felt somebody pressing my head down with their foot.

“I was shocked eight times altogether and I had urinated on the floor.”

“I’m a big man and I always thought of myself as a mentally strong man, but after this ordeal, I cried for three days and I didn’t want to come out of my house.”

Police sources claim Sylvester was Tasered only once, but admit that no weapons were found in Sylvester’s car. An investigation into the incident is now under way at the Independent Police Complaints Commission.