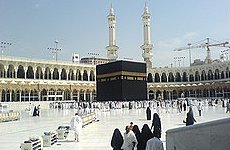 MUSLIM Holy water sold in London “is poisonous”, according to health experts.

The sacred water, known as Zam Zam water, comes from a well in the Muslim Holy city of Mecca, but researchers have found that it is full of dangerous chemicals including arsenic.

Bottles of Zam Zam water are allowed to be brought to the UK for personal use but, partly due to the health risks, they are not meant to be sold commercially.

However, an investigation by the BBC has discovered that shops in east and south London have been selling the liquid.

“The water is poisonous, particularly because of the high levels of arsenic, which is a carcinogen and can cause cancer,” said Dr Duncan Campbell, of the Association of Public Analysts.

As well as arsenic, carcinogenic nitrates have also been found in the water.

“The limits set in drinking water are set there for very good reason,” added Campbell.

“Once the water gets above that limit, it’s not safe.”

Last year the Food Standards Agency advised that, “Muslims need to be aware of the health risks associated with drinking this water”.

“If consumers find any water on sale that is labelled as Zam Zam, they should contact the local authority enforcement office at their local council so they can investigate further,” added the FSA.

Unlimited fines and imprisonment are available to the authorities as punishments for shops that continue to sell Zam Zam water.