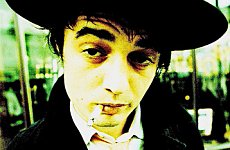 PETE DOHERTY was thrown out of Millwall’s FC’s New Den ground in disgrace after he urinated in a trophy.

The Babyshambles rocker – whose team came second in the Soccer Six charity tournament on Sunday (18.05.08) – relieved himself in the pot because “he is a huge Queen’s Park Rangers fan and thought it would be a laugh to leave a little surprise,” said one source, who added:

“Babyshambles were given access to the chairman’s office so the attention surrounding Pete wouldn’t get in the way of all the other guests.

“He decided to play a prank but overstepped the mark. One of the security guards was tipped off that Pete was trying to take a trophy. When he checked it out he found that Pete wasn’t nicking it, he was filling it up.

Millwall’s history isn’t exactly littered with football honours. The last major prize won by the team from south-east London was promotion from the third tier of English football in 2001. A few years later they were back down again.

To be fair, the Lions clinched the probably prestigious East London FA cup in 1886.

Amy and Sir Bob Geldof’s daughter Pixie were among the celebrities who turned out to see Pete’s team lose to dance band Faithless in the tournament’s final.