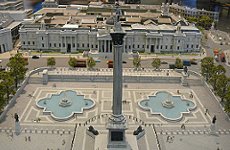 JESUS lives – and dies – again, this time on Trafalgar Square for a special Easter performance of the Passion of Christ.

“I hope the play will bring faith in Christ to those who don’t know about him, remind those who do and develop faith as the greatest gift that mankind can have,” said Peter Hutley, the event’s writer and producer.

Up to 150 actors, plus an assortment of donkeys, horses and possibly camels, are due to take part in Hutley’s work, which follows the traditional Passion outline of Christ’s trial and crucifixion at the hands of the Roman authorities and a baying mob.

The modern day equivalents of sour-faced centurions might well be the legendary beings at Health and Safety, who have caused the organisers some soul-ache.

“There are laws regarding the use of animals and children in theatre,” said the Passion’s director Ashley Herman.

“It’s hard enough doing Oliver!, but when you get them into a public arena it’s a nightmare.”

Herman, Hutley and crew have performed the Passion on Guildford High Street, so have experience of outdoor, street theatre and want to make use of Trafalgar Square’s unique opportunities.

“Where do you do it? Which part? Underneath Nelson’s Column? What we had in mind was Jesus bursting out from between the lions,” said Hutley.

The Passion of Christ comes to Trafalgar Square on Good Friday, 2 April. Admission is free.

Hire Bikes Go East and Date is set for Expansion into...