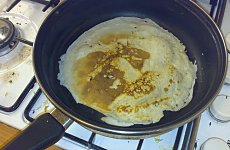 PANCAKE DAY is here, but most of us don’t give a toss.

That’s the conclusion of a survey from McDougalls, a company that makes flour, one of the classic pancake’s key ingredients*.

“Up until the ’90s most households would flip a few pancakes on Shrove Tuesday,” lamented Mark Wilkinson of McDougalls. “But it seems that fewer and fewer people can be bothered these days.”

The figures to back up Wilkinson’s woe look pretty stark. When asked, only a quarter of the survey’s sample knew Pancake Day was today and only a third said they’d bother celebrating in any case. Another poll, this time conducted by restaurant chain Little Chef, put the pancake crowd at a slightly higher 43%, but both surveys report a downward trend.

Three cheers, then, for three groups putting in a bit of extra effort today. One is at Westminster School near St Paul’s, which has an annual Pancake Greaze where a giant pancake is cooked and tossed before being fought over by posh schoolboys. The second is just down the river at the House of Commons where teams of MPs and Lords run a pancake race. Lastly, there’s a pancake tossing relay race in aid of Sport Relief at Tower Hill featuring celebrity chef Sophie Grigson.

So someone’s keeping the tradition going and, to add more sugar to the lemon, according to the McDougall’s poll Pancake Day is more popular among the under 25s than among the over 55s.

Pancake Day is held on Shrove Tuesday, a distant reminder of when Middle-Ages households would have to use up all the stuff banned over Lent, which included all animal-derived foodstuffs like:

* eggs and milk are the others, if you’re one of the don’t-care slackers.

Try LondonNet’s patented 4-3-2 technique for remembering the recipe. That’s four ounces of plain flour, three hundred ml of milk and two eggs. Whisk it all up into a batter. One ladle-full of that makes one pancake, cooked in a frying pan with melted butter. Traditionally served with sugar and lemon juice.