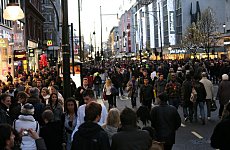 IT’S pedestrians only on Oxford Street, Regent Street and Bond Street this Saturday for Shop West End VIP Day, a now regular pre-Christmas event in which an expected two million visitors get free rein to shop their hearts out.

All three famous shopping streets are no-go areas for cars, buses and taxis between 10am and 6pm, but the lack of traffic is not the only bait for shoppers; 100 retailers are also putting up a series of special offers to tempt the cash out of purses and wallets.

“With traffic-free shopping straight after pay day, we anticipate record sales on the weekend of November 27th and 28th,” said Richard Dickinson of the New West End Company, which represents shops on the three streets.

The equivalent weekend last year saw £200M spent up west and this year NWEC are gearing up for a record-breaking £250M onslaught.