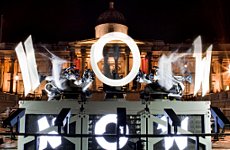 TRAFALGAR SQUARE is now home to a giant robot octopus, in place to help launch the London Design Festival which kicked off on Thursday and runs until 26 September.

The massive metal cephalopod might seem scary, but it doesn’t want a fight with the lions or even the pigeons. Outrace – that’s its name – is a friendly sort, happy to pump out your texts on the night sky in huge 3-D letters.

Messages of international importance like “Matt! Stop playing World of Warcraft at work!!!” were among the phrases seen on the Square in the early hours of Friday morning. Unfortunately, this octopus doesn’t predict football matches like its biological cousin Paul.

Built by German designers Clemens Weisshaar and Reed Kram, Outrace is just one of the many intriguing attractions lined up for the London Design Festival, which is to put more exhibits on Trafalgar Square, as well as at the South Bank, Victoria & Albert Museum and Covent Garden.

“This year’s festival is as ambitious as ever,” said Moira Sinclair of Arts Council England.

“It consolidates its status as a major cultural event not only in London but internationally.”

Wicked Celebrates 2,500 Performances at the Apollo Victoria this Weekend