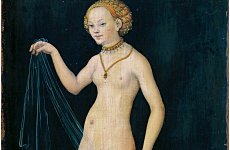 THE ROYAL ACADEMY wants London Underground to rethink its ban on a poster showing the goddess Venus in the altogether.

Venus was chosen by the Royal Academy to publicise its upcoming exhibition featuring work by the 15th/16th century German artist Lucas Cranach, but London Underground vetoed the plan.

“We have to take account of the full range of travellers and endeavour not to cause offence in the advertising we display.”

The Royal Academy have now urged Tube censors to reconsider. “We’re just hoping they change their minds and accept her,” said an Academy spokesperson. “We don’t have a version B where she’s got her clothes on.”

Cranach works are at the Royal Academy from 8 March to 8 June.

More on the Cranach exhibition here

London Hotels Whack Up Prices by 400% for Olympics, Finds New...