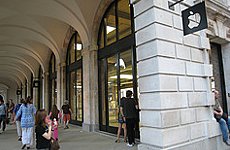 APPLE COMPUTER’S flagship shop in Covent Garden was raided in the early hours of this morning by a gang of thieves on motorbikes.

“It is believed there were around seven moped riders/motorcyclists involved, most if not all with a pillion passenger,” said a spokesperson for the Metropolitan Police.

“All persons were in full face crash helmets.”

After riding up to Apple’s Covent Garden base, the gang smashed its way through the window and grabbed what is thought to be thousands of pounds of Apple merchandise. iPads were a particular target, as the market-leading tablets are reckoned to have a high street value.

Two people, one aged 16, the other 21, have been held on suspicion of burglary in relation to the case, but the other members of the gang escaped after a chase.

“Islington police saw a moped and followed and attempted to stop it, but it was lost,” said the spokesperson.

Police have asked anyone with information on the crime to call Crimestoppers anonymously on 0800 555 111.

“It is essential that anyone who saw the smash-and-grab, or the suspects making off, contact us as soon as possible,” said another spokesperson.